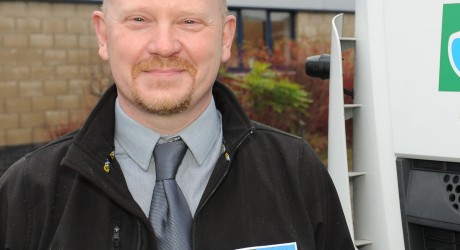 AS more businesses across Scotland start to comply with strict food waste regulations, a leading Scottish organics recycling firm has appointed a UK business manager to drive the business forward in new markets.

Keenan Recycling, which is headquartered in New Deer, Aberdeenshire, and also has a base in Linlithgow, has appointed Luca Pornaro to help lead the expansion of the business following the introduction of the latest set of Waste (Scotland) Regulations.

In 2014, the first set of guidelines were enforced, dictating that businesses of allsizes producing more than 50kg of food waste per week had to separate it from landfill or face a fine. The newest rules, which were enforced in January 2016, highlight that any businesses producing more than just 5kg of food waste per week need to recycle it, or face a hefty fine.

Mr Pornaro, who has worked at a number of leading names in the food waste industry throughout his career, played an instrumental role in developing the first food waste collections in Scotland, Cyrenians Organics Waste Recycling (CORE).

CORE, which was established in Edinburgh in January 2009, was the first organisation in Scotland to offer a competitive and efficient alternative to landfill for food waste coming from hospitality businesses and large canteens.

In his new role with Keenan Recycling, Mr Pornaro will use his extensive experience to educate customers about the importance of food waste recycling across Scotland and in areas where regulations are still not compulsory.

Mr Pornaro said: “I am delighted and honoured to be part of the growth of Keenan Recycling, and look forward to helping to grow the company across the UK.

“It is definitely going to be a challenge as regulations are still not in place in England and Wales, but Ifaced the same obstacle when I set up the first food waste collection service in Scotland, as there was no compulsion to do so at that time.

“Keenan Recycling is an extremely customer focused company, and we cater for everyone from a small café to corporates and chains of businesses, and in my role I will work with companies to offer cost effective solutions for their food collections.”

Keenan Recycling managing director, Grant Keenan, said: “It is essential for businesses to comply with the regulations, as if they don’t start recycling their food waste then the Scottish Environmental ProtectionAgency can hit them with an on-the-spot fine of £300, while repeat offenders face penalties of up to £10,000.

“We are delighted that Luca has joined the company at such an important time. His wealth of experience in the sector is highly important as we continue to grow the company acrossScotland and further afield during 2016.”

Family-run business, Keenan Recycling, which specialises in turning food and garden waste into BSI accredited bulk organic fertilizer compost for agriculture and horticulture use at its Aberdeenshire base, has invested £1million in its Central Belt expansion, which has included a fleet of six lorries to roll out its services to customers in Edinburgh and Glasgow.

Leftovers collected from customers in the Central Belt are fed into an anaerobic digester, then broken down by bacteria to producebiogas, that can then be used to generate green electricity.