Media Release: HESS resurrected on the 70th anniversary of the start of the Nuremberg Trials 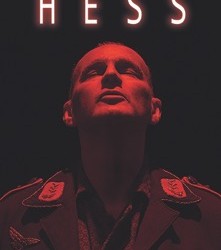 ON the 75th anniversary of Rudolf Hess, Hitler’s second in command, bailing out over Scotland on a self-appointed mission of peace and the 70th anniversary of the start of the Nuremberg Trials, Kinbur Productions and the Gilded Balloon are reviving HESS, Michael Burrell’s award-winning, one-man play, for the Edinburgh Festival Fringe 2016.

In HESS, Rudolf Hess has been incarcerated in the infamous Spandau Prison for decades. In his own mind, he has given his guards the slip whilst being transported to a military hospital. He is on the run and takes refuge in a dark and anonymous empty space, coming face to face with the first group of people he has seen since the tribunal at Nuremberg.

This is his one opportunity to talk. Hess supposes what he might say about himself, the Third Reich and also the world we have created in the time since the downfall of the Nazi regime. How much has really changed? Is it really a better place to live?

“In Burrell’s ingenious script and brilliant characterisation, HESS is many things, all provocative: a memoir of a madman, a study of political fanaticism, a treatise on justice, a portrait of old age, an analysis of penal confinement, a descent into Hell.” New York Post

The script In this stimulating and moving production – starring Derek Crawford Munn as Rudolf Hess – has been specially adapted by director, Kim Kinnie, for its run at Gilded Balloon Teviot, from Wednesday 3 to Monday 29 August 2016.

“I think the audience will also be challenged, in that at times the natural human response is to feel sympathy; sympathy for an old man who has been in prison for four decades. And then you remember who he is and what he did…”

Kim Kinnie, director of Hess, said: “Bringing Hess back to the stage is a very personal, but very rewarding project for me. Michael’s work struck a chord with audiences all over the world, and of course Rudolf Hess was very much still alive when the play was first staged.

“Forty years on, the ideas and themes are still absolutely relevant and I think our audience will be both fascinated and appalled by the character and the overall premise.”

In May 1941, a lone parachutist bails out over Eaglesham, East Renfrewshire, in Scotland.

Rudolf Hess, Deputy Fuhrer of the German Reich, was on a self-appointed mission of peace – at the height of the war.

He was immediately imprisoned and later convicted at Nuremberg on charges of ‘conspiracy for war’ and ‘crimes against peace’ in 1946.

Sentenced to life, he was eventually locked up in the infamous Spandau prison in Germany. Twenty-nine years ago (August 1987) Rudolf Hess, a frail 93 year-old and the last remaining prisoner, was found dead in the prison’s summerhouse, having apparently committed suicide.

The original production of HESS, written by and starring Michael Burrell, was the recipient of OBIE Award in New York for outstanding achievement in Off-Broadway theatre.

HESS, the award winning one man play by Michael Burrell