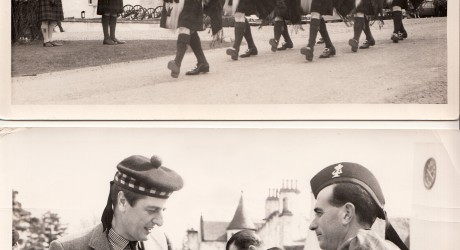 50th anniversary of revival of the Atholl Highlanders

IT was 50 years ago (in 1966) that the Atholl Highlanders, the Duke of Atholl’s private army, paraded for the first time since the First World War.

The Highlanders had been established in 1844 with the granting of the Queen’s colours by Queen Victoria, as a thank you for the guard provided by the men of Atholl during her stay at Blair Castle that year.

The annual parade went into abeyance with the absence and death of so many men in the First World War. However, in 1966 the 10th Duke of Atholl decided it was time to hold the annual parade again and six men, all of whom worked or were tenants on the estate, were chosen to march past the Duke.

They were led by two pipers. Pipe Major Peter Wilkie was present and he provided a link with the past because the pipers had continued to play for special occasions during the inter-war years.

The Duke gave each man a sprig of juniper (the Murray clan plant) as a symbol of their joining the regiment. In each of the following years, an increasing number of men has joined. The present total is about 100, including the pipes and drums and the officers.

In addition to their annual parade at Blair Castle the regiment has in recent years travelled to Athol in Massachusetts, to South Africa (to visit the 11th Duke) and Braemar, where they presented their new colours to The Queen.

Most recently, they took part in The Queens 90th birthday celebrations at Windsor earlier this month.

Their annual parade in front of the 12th Duke of Atholl takes place this year on Saturday 28th May at Blair Castle followed by the Atholl Gathering Highland Games on Sunday, 29th May.

The top photograph shows the 10th Duke of Atholl receiving the salute from the Highlanders.

MEDIA RELEASE issued by Blair Castle. You too can share your stories (aka press or media releases), on allmediascotland.com. Email here for more information.