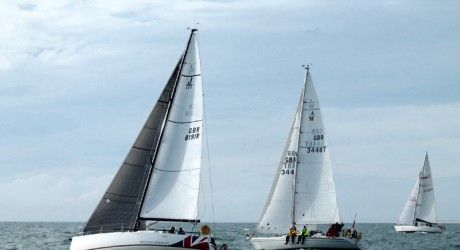 THE Three Peaks Yacht Race is a tough endurance event in which teams of four or five, based on yachts, set sail from Barmouth and sequentially despatch runners to climb to the summits of the highest mountains in Wales, England and Scotland.

This is the equivalent of three marathons in three or four days. All participants have to be over 18 years-old. Rowing is allowed. Engines are not.

You can track all the teams progress here  Seventeen yachts have entered teams.

The first leg is a sail of 62 sea miles, from Barmouth to Caernarfon. After being put ashore, the runners set off to the summit of Snowdon via the Mountain Ranger Path and return via Llanberis, a distance of 24 miles.

The second leg is Caernarfon to Whitehaven. Approximately 100 sea miles. The distance to Scafell Pike and back is around 40 miles, so bicycles are allowed for the first part.

The last sail, from Whitehaven to Fort William, is around 227 sea miles – rounding the Mull of Kintyre and north to the Sound of Jura through some difficult tidal streams and overfalls.

The runners then set off to the summit of Ben Nevis. Their race is finished when they return and cross the finish line.

The race is being sponsored by Bruichladdich Distillery on Islay.

First prize is a bottle of their rare Black Art single malt Scotch whisky while the teams coming second and third teams will be awarded bottles of an uber-provenance expression distilled from barley grown on the island.

All boats will also be provided with The Classic Laddie in the iconic blue bottles associated with the progressive Hebridean distillery.

They will not be opening them until the finish line is safely crossed!

Bruichladdich will be following the race on their social media streams using #3PeaksYachtRace.

MEDIA RELEASE issued by Bruichladdich Distillery. You too can share your stories (aka press or media releases), on allmediascotland.com. Email here for more information.