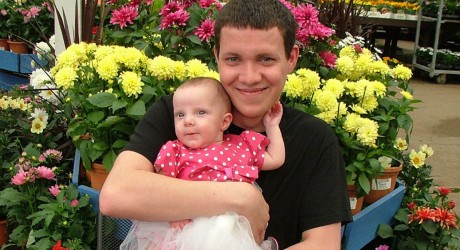 His ‘miracle’ baby daughter, Niamh, has defied the odds to survive – after being born ten-and-a-half weeks premature and weighing only two pounds six ounces.

Yesterday, David and his partner, Laura McCafferty, brought little Niamh along to Cardwell Garden Centre, in Gourock to meet his work colleagues and help launch a special Father’s Day competition.

The popular garden centre is asking sons and daughters to go to Cardwell’s Facebook page and tell them why their dad is the best in the world with the winner being given a slap-up meal for four and a hamper of garden goodies.

As Niamh – now seven months old and a picture of health – became the centre of attention to staff and customers at Cardwell during her visit, David told of their ordeal and how he was terrified his baby daughter might not survive after being born by Caesarian section.

Last year, David and Laura, from Brachelston Street, Greenock were delighted when they learned they were expecting twins. But, sadly, one of the babies didn’t survive and complications meant that Niamh’s life was in danger.

Doctors at the Queen Elizabeth University Hospital, in Glasgow decided Laura had to give birth early to give Niamh a fighting chance, although they only gave her a 20 per cent chance of survival.

David said: “There’s no doubt this is the most special Father’s Day ever for me, as we weren’t sure if Niamh would survive and I was still going to be a dad.

“The whole way through the latter stages of the pregnancy we were told it could go one way or the other. I hoped for the best, but feared the worst.

“I was so relieved that Niamh pulled through, although she had to be given help to breathe and was in hospital eight weeks after she was born.

“It was amazing to see someone so small survive and when she was first being fed in hospital, Niamh only got one millilitre of milk every four hours – and that’s less than a teaspoon full.

“When Niamh was born it was the best day of my life, but the most nerve-wracking as well.

“You can’t imagine how relieved I am that Niamh survived and being able to hold her is the best Father’s Day present I could ever have.”

Mum, Laura added: “There’s no doubt Niamh is our miracle baby and doctors have told us it’s very unusual for a baby born so small to be doing so well.

“When she was born there were about 20 doctors and nurses in the room and Niamh was immediately taken to the neonatal unit and it was three days before I could hold her.

“We’ve already got David’s Father’s Day gift, but as he says himself, Niamh is the best present ever.”

With Father’s Day on Sunday, June 19 fast approaching, here’s a chance to tell the world just how wonderful your dad is by logging on to the Cardwell Garden Centre Facebook page and entering our Father’s Day contest.

And you could win him a slap-up meal for four in Cardwell’s Patio Restaurant, plus a gift hamper.