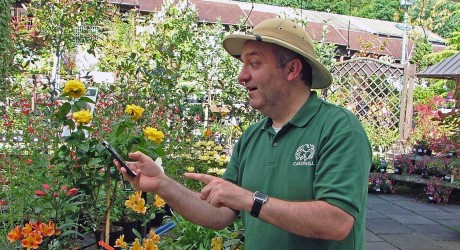 THE latest Pokemon Go craze has hit a Scots garden centre with customers hunting for the Pokemon creatures hiding among the bushes, plants and flowerbeds.

Now, Cardwell Garden Centre, near Gourock has joined the fun by offering prizes to people who post photos of captured Pokemon critters on their Facebook page.

Bosses at the centre had noticed visitors wandering around the horticultural and gardening displays with their eyes glued to their phones.

And when they discovered people were playing Pokemon Go they decided: “If you can’t beat ‘em, join ‘em!”

Now, anyone who posts their photo of a captured Pokemon on the Cardwell Facebook Page will be entered into a prize draw to win one of several £5 voucher prizes for the centre’s Patio Restaurant.

Cardwell retail manager, Paul Carmichael, revealed that he was at first mystified why people were walking around staring at their phones.

And when one of the customers explained they were playing Pokemon Go, Paul decided to try it out for himself.

He said: “I couldn’t believe how many of these Pokemon creatures had been hiding out in and around the flower beds and bushes and we hadn’t noticed them before.

“Some of these critters are quite brazen and I’ve even seen them sitting on the benches and garden tables and chairs we’ve got out on display.

“I’ve been caught by the bug and I play the game so much now, staff here are now calling me Pokemon Paul!”

Paul adds: “Everyone seemed to be having so much fun that we thought we’d join in and add a wee bit to the game by asking people to post their Pokemon Go pictures on our Facebook page and have a prize draw as well.

“At the end of the day it’s all a bit of fun and a few of the Pokemon hunters will be able to get a free cup of tea and a cake on us with their prize voucher.”