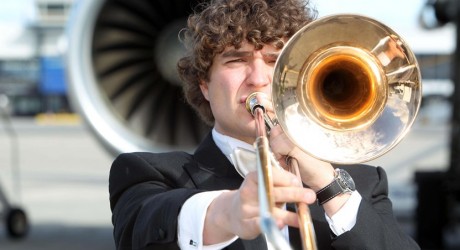 ON Thursday July 28, passengers at Glasgow Airport will be invited to exercise their voices with the backing of the Royal Scottish National Orchestra (RSNO) and accompanied by dancers from Dance House Glasgow, as the nation’s popular air terminal marks its 50th anniversary.

Director Eliot Murray leads over 50 orchestral musicians – who will be joined by over 30 dancers from Dance House Glasgow – for two performances at Glasgow Airport’s Departures area (11.30am and 12.10pm), marking the hub’s golden anniversary and opening the facility’s Best of Scotland festival.

Best of Scotland provides passengers with the opportunity to celebrate and experience Scotland’s finest food, drink and culture, and will see the terminal and surrounding areas showcase some of the best tastes, sights and sounds the country has to offer.

As part of the Best of Scotland celebrations, the RSNO and director, Eliott Murray, will perform a selection of hits from the 60s – the decade the airport was opened – from popular tunes of the time to well-known themes from film and television.

The orchestra will also perform a dedicated arrangement of ‘Happy Birthday’, where passengers will be invited to join in.

Staff from the airport and the RSNO will also be on hand to select the best voice during each of the two performances, with the winners each receiving a £50 gift voucher to spend at the airport’s many retails outlets.

Says RSNO chief executive, Krishna Thiagarajan: “We’re always looking for new ways to present the live orchestral experience to audiences, and over the past five years we’ve developed a successful partnership with Glasgow Airport which has led to some unforgettable moments, including having a Commonwealth Gold medallist and Scotland national team goalkeeper conduct Scotland’s national orchestra.

“This year is a significant birthday year for both Glasgow Airport and the RSNO, so it seems appropriate to present the orchestra in a party mood and bring a sense of the swinging 60s to the departures area for passengers and staff.”

Added Steven Marshall, head of Airline Marketing & Development at Glasgow Airport: “For many visitors, Glasgow Airport is their first and last impression of Scotland, and our Best of Scotland campaign is a great way to celebrate the quality of our country’s fare while also providing exciting and interesting entertainment for our passengers.

“Our 50th year has been one of our busiest-ever in terms of passenger numbers, with the launch of some fantastic new routes and services, and we look forward to celebrating our birthday in style with an orchestral performance by the RSNO.”

The RSNO is participating in several key events over the summer.

The orchestra will appear at the Edinburgh International Festival on Sunday 14 August, performing Elgar’s The Apostles at the Usher Hall. On Saturday 20 August (1.00pm) the RSNO will be joined by American conductor, Robert Trevino, for its continuing lunchtime series, Symphony, Soup and a Sandwich, at the Glasgow Royal Concert Hall’s New Auditorium.

The RSNO welcomes American diva, Angel Blue, for Music at the Museum, two evenings of music from stage and screen, at Glasgow’s Kelvingrove Art Gallery and Museum on Friday 16 and Saturday 17 September.

And the 2016:17 Season opens with Rachmaninov’s Symphony No2 and Tchaikovsky’s Violin Concerto with soloist Nicola Benedetti, at the Usher Hall, Edinburgh on Friday 6 October and at the Glasgow Royal Concert Hall on Saturday 7 October.