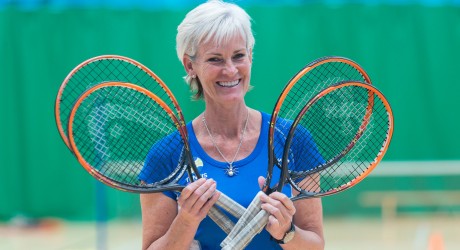 AS Andy Murray celebrated his Olympic Gold, his mother – Judy Murray – served up a lesson in inspiration to Aberdeen teenagers.

The visit was organised on behalf of Developing the Young Workforce (DYW) North East, which is a seven-year programme, as part of the Curriculum of Excellence, which aims to better prepare children and young people from ages 3–18 for the world of work.

Judy Murray facilitated two 45-minute interactive sessions at Aberdeen Sports Village focussing on the difference marginal gains can make when people apply themselves in either sport or their studies.

The session, which involved pupils from Harlaw Academy, Bridge of Don Academy, Banff Academy and Mackie Academy, was held in ASV’s main sports hall and as designed to help to prepare the young students with skillsets to support them in the future.

Judy Murray said: “It is so important to work with young people of all ages and encourage them from an early age to apply themselves as best they can.

“Inspiring them to do their best can make a real difference to their lives now and in the future and set them on the right path to a successful career in the workplace.

“Meeting these North-east teenagers at such a superb facility like Aberdeen Sports Village really highlights that young people can be inspired through encouragement and spending time in the right environment can give them an insight into what a little determination and focus can achieve.”

The focus of the sessions was in line with Aberdeen Sports Village’s ethos to support the community and encourage young people to get involved in various sports from a young age, developing a younger generation that is knowledgeable and interested in health and wellbeing.

“The timing of this visit could not have been better as we are riding high on the back of a very successful Rio 2016.

“With Andy winning his second gold medal in a thrilling final, he has provided a huge feeling of pride and goodwill across our nation.

“At ASV, we love sport, and we will always promote sport as a force for good in Aberdeen and the North East.

“There is not a better sports ambassador than Judy Murray and we were delighted to welcome her to the Sports Village.”

There has been a rise in youngsters taking up tennis in Scotland recent years due to the successful career of Scot, Andy Murray, and his latest medal win at Rio 2016 is likely to fuel even more passion and interest in the sport.