Media Release: Keenan’s growth in line to be one of top deals in Scotland 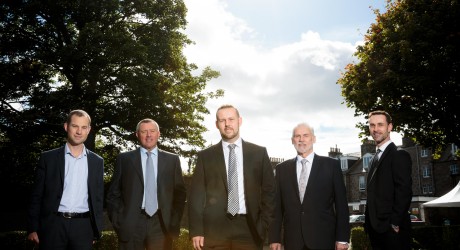 A MULTI-million pound deal between leading Scottish food waste recycling firm, Keenan Recycling, and Business Growth Fund (BGF) is in the running to be named one of the top investment deals struck in the past year.

Keenan Recycling, a family-run business headquartered in New Deer in Aberdeenshire, with a second base in Linlithgow in the Central Belt, is one of three Scottish companies shortlisted for the Small/Mid-sized Company Deal of the Year Award at this year’s Scottish Business Insider Deals and Dealmakers Awards.

The award-winning firm, which boasts a 14-acre facility near Turriff for recycling food, garden and organic waste into compost for agricultural and horticultural use, has been named as a finalist after securing a £2.2million investment from BGF.

As part of the deal, BGF, an independent company providing growth capital for small and mid-sized businesses, secured a minority equity stake in the firm and a seat on the board.

The agreement supported Keenan’s expansion into the Central Belt with the launch of an office near Edinburgh and its investment in an eight-acre site for development in Linwood, near Glasgow.

The deal has also paved the way for the firm’s ambitious plans to grow turnover from £7m to between £30-£40m in the coming five years, with a focus now on acquiring more sites and capitalising on the market south of the border.

Keenan Recycling is vying for the top spot at the awards against two other Scottish firms, Glenrothes steel manufacturer, Pipe and Piling Supplies, and Perthshire-based soft fruit growers, Stewarts of Tayside.

The prestigious awards, being hosted in Glasgow in September by presenter and comedian, Fred MacAulay, will acknowledge and reward excellence in corporate financial transactions during 2015/2016. There are nine awards and 24 finalists, with the overall Deal of the Year winner being announced on the night.

Managing director of Keenan Recycling, Grant Keenan, said: “These are hugely prestigious business awards and we are truly honoured to be named as a finalist among some successful and impressive Scottish businesses.

“We have grown slowly over the years but the deal we agreed with BGF has propelled us to a new level and given us the ability to realise our growth capabilities much early than we would have on our own.

“The deal has not only supported our growth financially, it has allowed us to reap the benefits of being able to work alongside some hugely knowledgeable business entrepreneurs who have worked closely with us to focus our vision and allow us to recognise our true potential as a business.”

Keenan Recycling launched its commercial food waste collection scheme in 2010 to help businesses divert food waste away from landfill, and it now has a team of 80 employees across the North-east and Central Belt.

Similar legislation is now in place in Wales and Ireland and Keenan Recycling is set to focus on an acquisition in England over the coming months to be in position for any forthcoming changes south of the border.

The Scottish Business Insider Deals and Dealmakers Awards 2016 will take place at the Hilton Hotel in Glasgow on Wednesday, 7 September.