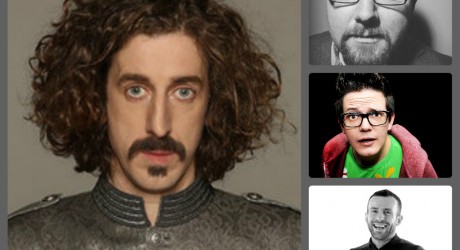 “The Gods of Comedy chose Tom Wrigglesworth for greatness” – The Scotsman

Joining Tom Wrigglesworth on the Gilded Balloon Comedy Circuit stages will be David Morgan –  the bespectacled, Jedwardian boy wonder and Eurovision aficionado – together with Gary Meikle, whose humour is punchy and light and peppered with uncompromising anecdotes.

Scott Gibson, the recipient of the 2016 Best Newcomer Award at the Edinburgh Comedy Awards, who mixes a conversational style with his own unique brand of dark humour, will be the compering at all three venues.

Wrigglesworth is one of the finest and most original comics on the UK circuit.

His shows often take a farcical and emotional look at family relationships. The charismatic wordsmith and master of spontaneity, who loves to experiment, is also blessed with an innate ability to riff with an audience like they’re old friends.

With a disarmingly charming delivery, the Yorkshire funny man is a phenomenal live performer, a naturally engaging TV presenter and star of BBC Radio; with a host of prestigious awards to his name.

He is also a regular contributor on The Discovery Channel.

Expect deep honesty, dark truths, personal reflection and laughter from compere, Scott Gibson. He is an absolutely compelling storyteller at heart, mixing a conversational style with his own unique brand of dark humour, confidently leading his audience down a path few dare to tread.

This ability to push boundaries and control any room he plays, has allowed Gibson to move up the ranks quicker than many before him.

His recent critically-acclaimed Edinburgh Fringe show, Life After Death, about a near death experience, garnered Scott the 2016 Best Newcomer Award at the 2016 Edinburgh Comedy Awards.

The sleek, instantly likeable and gloriously understated Glaswegian comic, Gary Meiklem, took to the comedy stage for the first time in 2013 and won Best Newcomer at the Scottish Comedy Awards in 2015.

Dubbed ‘the people’s comedian’ and with his strong sense of what makes a great story (often venturing towards the dark side and covering growing up in Glasgow, online dating, failed relationships and his disdain for children), he is fast proving himself as one of the hottest new talents to come out of Scotland.

David Morgan’s solo gigs and his ability to make audiences ‘feel they’ve had a show performed specifically for them’ (London is Funny) cements him as a firm favourite in the industry.

This is thanks to his friendly persona, honesty about his flaws and a gentle, genuinely interested line in audience interaction. He is also a pop culture expert who is called upon for his encyclopaedic knowledge of everything from Eurovision to superheroes.