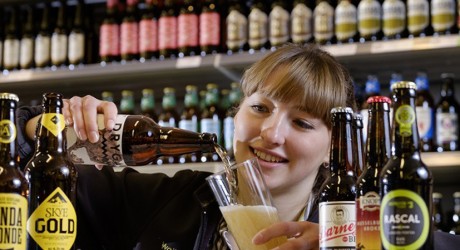 SALES of Scottish craft beer and premium-bottled ales at Waitrose have more than doubled in just three months.

Figures show sales are growing six times faster than premium-bottled ales in the rest of the UK as demand reaches new heights. It’s the first time the sales growth of Scottish products in the range has outstripped the rest of the UK.

The trend has coincided with Waitrose increasing the number of Scottish breweries it works with to 24 in late May, which enabled the retailer to double the number of craft beers it offers. More than 90 Scottish beers, lagers and ales are now available.

The nine new breweries, which started supplying Waitrose in late spring, have already experienced significant increases with their combined sales up more than ten per cent this month compared to July.

Among those new breweries is the microbrewery, Fallen Brewing, in Stirlingshire, that has seen sales of its unfiltered beer rise by 35 per cent in recent weeks.

“We aim to provide our customers with the best-quality beers we can make.

“Waitrose, as one of the leading supermarket brands with such high standards, was the ideal partner for us to start supplying our products to a wider audience.”

The Tempest Brewing Company in Tweedbank is also a new supplier to Waitrose and has seen sales rise by 17 per cent from July to August.

Annika Meiklejohn, director of the Tempest Brewing Company, said: “Working with Waitrose has been a great venture for our brewery in making our beers more visible and widely-available across Scotland.

“We have a shared dedication to quality and a genuine enthusiasm for unique, interesting produce, so our experience with the team has been hugely positive and we look forward to a continued partnership in the future.”

However, not just new breweries have seen growth. Breweries in the original range of beers have benefitted from increased sales since the re-launch.

Caesar Augustus Lager, brewed at Williams Brothers Brewing Co. in Alloa, has seen a 46 per cent rise in sales in the last three months and remains the best-selling beer in Waitrose’s Scottish range.

Aviemore’s Cairngorm brewery has supplied the supermarket since it opened its first Scottish stores ten years ago, but has still seen a 30 per cent increase in sales over the same period.

Argyll’s Fyne Ales has supplied Waitrose for the last six years, but the re-launch enabled the brewery to add new products to its range, including Jarl, which is now the best-seller of all the new beers added in May with sales still increasing by more than ten per cent each month.

Waitrose local and regional buyer, Oliver O’Mara, said: “There are no guarantees that by doubling the number of products available you will simply double sales, but that is exactly what has happened – the demand has been phenomenal.

“Our partnership with Food and Drink Hub Scotland and the continued support of Scotland Food and Drink has enabled us to put together one of the biggest selections of craft beer and ales of any supermarket.

“Scottish breweries are making some of the best craft beers in the UK and continue to push the boundaries of innovative new styles.”

For further information or images, please contact Pagoda PR on 0131 556 0770 or email waitrose@pagodapr.com

Waitrose placed 49 new Scottish craft beers on its shelves in May 2016, to introduce its Scottish customers to the best quality ales from across the country.

It also extended the selection of beers and ales from some of its existing suppliers, such as Fyne Ales, bringing the total number of Scottish beers, ales and lagers available to over 90.

Waitrose’s beer experts have been working on expanding the craft beer offering since September 2015.

Working with Scotland Food and Drink, the team sampled 140 craft beers from across Scotland before making its final selection.

Twelve of the new beers are exclusive to Waitrose, including three from Fallen Brewing in Stirlingshire; the Blonde and Wolf Dark bottles from Lossiemouth-based Windswept Brewing; signature bottle, Seggie Mill, from Eden Mill brewery in St Andrews; and the Black Cork from Knops Beer Company in East Lothian.