Media Release: First-ever Chapelton Bike Ride a success after hundreds of cyclists gear up on the day 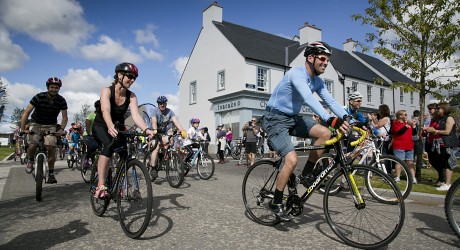 ABERDEENSHIRE’S newest bike ride has been hailed as a huge success, after hundreds of cyclists and spectators attended the event on Sunday 4 September.

A total of 238 participants took part in the Chapelton Bike Ride, which took place in the new town of Chapelton, near Newtonhill.

Hundreds of spectators flocked to the town’s Hume Square to watch as cyclists returned from the 12 and 42-mile routes.

The bike ride was held in aid of North East Sensory Services (NESS), a sensory impairment charity that supports over 4,800 people in the North-east. Over £6,000 was raised for NESS through the Chapelton Bike Ride, which will help the charity provide social work and life-enhancing services to people who have sight or hearing loss.

Also participating in the event were housebuilders from Chapelton developers ZeroC, A&J Stephen and AJC Homes, as well as David Carnegie, the Duke of Fife, from Elsick Development Company.

After a friendly competition against one another, Alistair Gordon, Earl of Aboyne and managing director of AJC Homes, came out on top, as he crossed the finish line with a time of 2 hours 45 minutes across the 42-mile route.

Neil Skene, fundraising co-ordinator at NESS, said: “All of us here at NESS are thrilled with the number of cyclists and spectators who attended the Chapelton Bike Ride. A lot of organisation and planning went into the event, as it’s only in its first year, so it’s great to see that all the hard work has paid off.

“It was a fantastic day and we received lots of positive feedback from the cyclists, who said that both the 12 and 42-mile routes were great fun to take on.

“The atmosphere in Chapelton was buzzing, as the square was packed full of residents and visitors who turned out to enjoy the wonderful local music and food and drink that was on offer – as well as cheering on the cyclists throughout the day.

“We’re extremely thankful to everyone who participated and raised vital funds for NESS, as well as the main sponsors, Savills and Burness Paull. Thanks to their support we can continue to help people with a sensory impairment achieve independence and overcome any challenges they may face in day-to-day life.”

Caroline Fife, the Duchess of Fife, director of Elsick Development company, the developer behind Chapelton, said: “It was a great feeling welcoming everyone to Chapelton for our first ever major event. The day was a huge success and we’re proud to have worked alongside NESS to help raise funds for such a worthwhile cause.

“Chapelton’s sense of community was really evident on Sunday and the spectators did a brilliant job of cheering on the cyclists, which helped to significantly boost their morale.

“The live music, entertainment and delicious food available were all extremely well received and everyone who came along had a great day out.

“There was lots of healthy competition between the Chapelton housebuilders and they had a good laugh joking about who would finish first, so it was very entertaining watching Alistair from AJC Homes cross the finish line first.

“I’ve also been really impressed by everyone’s fundraising efforts for NESS and fully embracing this charity initiative within the community where they work.

“We’re also very thankful to the participants and spectators for all their support and we look forward to welcoming everyone back to Chapelton next year.”