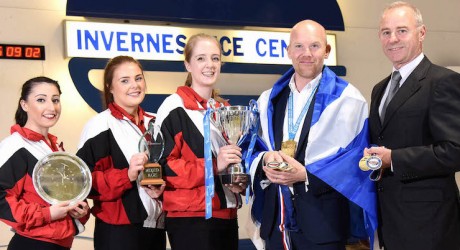 THE Inverness Ice Centre has undergone an extensive refurbishment which will ensure that the leading north ice sport venue offers the best possible facilities to continue to nurture Olympic, Paralympic, world and European champions of the future.

To mark the £719,982 upgrade, a bumper weekend of fun-filled ice themed activities will take place to allow both ice sport enthusiasts as well as those who may not have tried out ice sport before, the opportunity to come and experience the new look centre.

The weekend kicks off on Friday October 28, when the centre on Bught Drive will be officially re-opened in front of an invited audience of guests, including representatives from Highland Council and sportscotland.

The chair of Inverness Ice Centre, Tom Pendreigh, will carry out the cutting of the ribbon, which marks a major milestone for the centre.

On Saturday October 29, a rare opportunity to learn how to play one of Scotland’s ancient sports is on offer at a try-curling-for-free event.

Top-class tuition will be provided by qualified coaches from the Highland Curling Development Group during the three Try Curling sessions which will take place at 10am, 11.30am and 2pm.

The 11.30am session is aimed particularly at UHI freshers and Inverness’ very own triple World Curling champion, Ewan MacDonald, will be on hand throughout the day to offer some winning tips and advice. His impressive medal haul will also be on display.

Equipment will be provided but users should wear warm, loose-fitting clothes and clean leisure/training shoes.

Those taking part will also get a free cup of steaming hot tea or coffee to ensure they are warmed up after their session on the ice.

On Sunday October 30, ice-skating, ice hockey and even a couple of characters from the Disney hit film, Frozen, will take centre stage.

The day begins at 10am with an opportunity to have a go at ice-skating with the Try Skating with Inverness Skating and Dance Club with special guest appearances by Disney’s Frozen characters, Princess Elsa, and Olaf, the loveable snowman.

Next up, it will be time for young wannabe ice hockey players to take to the ice with the Come and Try Ice Hockey session kicking-off at 11.30am.

This hour-long session is open to children of all skating abilities and all equipment will be provided.

At 1pm, visitors will be treated to a mesmerising ice dance show. Special performances showcasing incredible skill will be performed by a variety of age groups encompassing both solo and group dances.

From 3.30pm until 5pm a unique public skating session will take place and as a special offer as part of the celebratory weekend, places for this session are available at half price per person.

Adults are £3, children £2.50, and a family ticket is only £9 including boot hire. Places are available on a first-come, first-served basis.

The celebration will draw to a close following a memorial hockey match for seniors between the Highland Capitals and the Inverness Hurricanes selected teams, which is played in memory of Jason Craig one of the founders of the Capitals.

It begins at 5.30pm and will be the seventh time the match has been contested.

The lounge bar will be open and spectators are also welcome.

The two largest funding packages have come from sportscotland, the national agency for sport, and The Highland Council Capital Grand fund, contributing £345,125 and £171,870 respectively.

The Ice Centre upgrade includes a new bespoke chiller pack, air-cooled condensers and control system from G&O Refrigeration along with a new floor and barriers in the ice hall supplied and installed by IceTechUK.

It’s hoped the upgrades, which will make the centre brighter and more modern, will also encourage more first-time ice skaters through the front door of the centre in the future, which in turn will help the social enterprise facility increase its revenue, in order to ensure the sustainability of the centre in future years.

Inverness Ice Centre also plays host to the annual Strictly Inverness dancing extravaganza, which sees thousands of pounds raised each year for the Highland Hospice and the Ice Centre itself.

Tom Pendreigh, chair of Inverness Ice Centre, said: “We have secured the funding through various different sources, including over £80,000 of our own funds – and we are now delighted that the Inverness Ice Centre is going to be officially re-opened.

“The upgrade is essential for the centre to move forward, developing it into one of the largest wet weather facilities in the north and it is central to the Inverness Ice Centre’s longevity.

“Everyone involved with the Inverness Ice Centre is really looking forward to the grand re-opening which is a huge milestone for the centre.

“We hope to welcome many people through the doors including those who have not previously had experience of any ice sports.

“The facility is for the whole community to use and enjoy.”

Booking for any of the weekend activities is recommended as uptake is expected to be high. To ensure you don’t miss out call the Inverness Ice Centre on: 01463 235711.

The Inverness Ice Centre changed ownership a number of times before its users bought it in 2002, and it became a charitable organisation as part of the process.