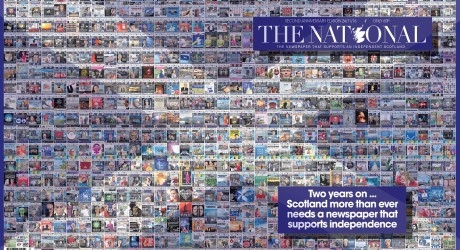 THE National, Scotland’s pioneering paper which made history and headlines with its launch as the only pro-independence daily national title, tomorrow celebrates its second birthday.

The newspaper first published weeks after the 2014 independence referendum amid a clamour by readers for an alternative view to a largely pro-union Scottish media.

And the paper is breaking new ground again by launching a series of roadshows across the towns and cities of Scotland with a live newsroom and evening events, starting in the Highland capital of Inverness on St Andrew’s Day.

Other confirmed locations include Penicuik, Dunoon, Fort William and Fife with many more on a shortlist after a flood of requests from readers to visit their area.

The National will also publish a stunning souvenir birthday edition on Thursday 24 November with a glossy front cover featuring all of the nearly 600 iconic front pages the paper has produced since launch.

Initially published for a trial week, The National captured interest and market share in what media analysts at the time labelled a very bold initiative in a challenging print market.

Editor, Callum Baird, said: “The National has exceeded all our expectations over the past year. The success of the paper is down to our very loyal readers, our excellent team of journalists, and the alternative voices of our columnists.

“We’re now doing what no other national newspaper does and taking our editorial floor out to towns and cities to further engage with the people of Scotland who want their voice heard.”

Richard Walker, founding and consultant editor of The National, said: ”It’s difficult to believe that it was two years ago we published the first issue of The National. We remain overwhelmed by the support we receive from our readers, and the genuine affection they express for the newspaper.

“It is a privilege to be the only mainstream daily newspaper to represent the huge number of independence supporting Scots.”

A major engaging force for the brand is The National’s website which features extremely lively social media and discussion forums with Scots of all ages passionately debating the multitude of issues around Scottish independence.  The National will continue to offer that important discussion platform in print and online.

Circulation is over 10,000 people daily with 2,000 additional online subscribers.

The National costs 60p Monday to Saturday, available at newsagents and supermarkets or via discounted subscriptions.

MEDIA RELEASE issued by Newsquest Media Group. You too can share your stories (aka press or media releases), on allmediascotland.com. Email here for more information.