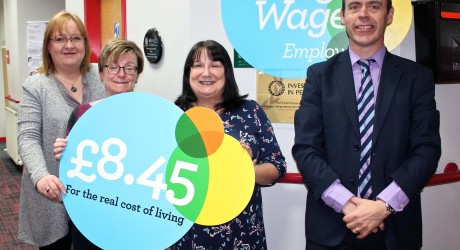 A NORTH-east charity has joined over 640 Scottish employers by becoming an accredited Living Wage Employer.

North East Sensory Services (NESS) which has offices in Aberdeen, Elgin and Dundee has committed to pay all staff whether they are permanent employees or third-party contractors a real Living Wage, which is a minimum hourly wage of £8.45 – significantly higher than the national minimum wage of £6.95 and the current minimum wage premium for over 25s of £7.20 per hour introduced this April.

NESS is understood to be one of only 17 organisations in Aberdeen to be accredited as a Living Wage employer.

The move has been welcomed by the Poverty Alliance who deliver the Scottish Living Wage Accreditation Initiative in partnership with the Living Wage Foundation.

Employers choose to pay the Living Wage on a voluntary basis. The Living Wage Foundation, The Poverty Alliance and the Scottish Living Wage Campaign say that work is the best way out of poverty.

Graham Findlay, chief executive for NESS, said: “At NESS, we believe strongly in supporting our staff as they are central to the excellent service we deliver.

“It is therefore important that we pay everyone a fair and reasonable wage, so we are delighted to have joined the Living Wage campaign.

“Our commitment to looking after our staff and volunteers earned us a prestigious award from Investors in People earlier this year, and becoming an accredited Living Wage employer is the next step along that path towards being the best employer we can be.”

“With two-thirds of children in poverty in Scotland living in a household where someone works, paying the Living Wage is more important than ever.

“Not only does paying the Living Wage ensure that everyone takes home a fair day’s pay for a fair day’s work, it has benefits to businesses too, including increased productivity, increased staff retention and lower rates of absenteeism.”