Media Release: University of the Highlands and Islands announces its 2016 Student of the Year 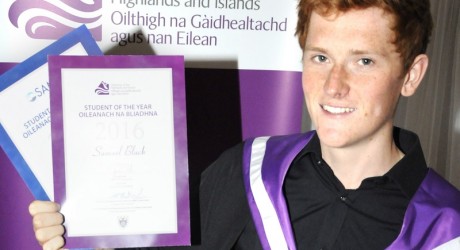 A GRADUATE with a passion for marine science has been named as the University of the Highlands and Islands Student of the Year 2016.

Samuel Black (22), from Dunbar in East Lothian, graduated from the Scottish Association for Marine Science UHI (SAMS UHI) earlier this year with a first-class honours degree in marine science with Arctic studies. He was selected for the award in light of his exceptional academic work, his enthusiasm and his contributions to SAMS UHI, the surrounding area and his local community.

As well as achieving top grades throughout his four years at the Argyll-based institution, Sam also found time to set up a diving club, help children learn about the Arctic and take part in an extreme challenge to raise money for the charity, Breast Cancer Now.

Sam was nominated for the Student of the Year award by Polly Crooks, a registry officer and student support worker at SAMS UHI. Her nomination was supported by several other members of staff, including Sam’s lecturers.

Polly explained: “Sam was a fantastic, hardworking student who achieved excellent grades. His enthusiasm for marine science, SAMS UHI and the surrounding area was hugely apparent. He chose to study in Svalbard in his third year and excelled in this environment; his passion for outdoor recreation coupled with his interest in Arctic science helped him to achieve impressive results.

“Sam was always willing to assist with outreach work and promotion of our programmes. While studying in the Arctic, he set up a link to a school in his hometown so pupils could learn about the Arctic. He also contributed to student life by helping to set up and run the SAMS UHI diving club.

“During his last and most demanding year of studies, Sam embarked on a mission which involved a swim on Loch Shieldaig, a bike ride and a marathon which included the ascent of two Munros. He was one of the youngest competitors in Celtman and raised thousands of pounds for charity.”

Speaking about becoming the University of the Highlands and Islands Student of the Year, Sam said: “I’m extremely honoured by the award and I’d like to thank all the staff and my fellow students at the Scottish Association for Marine Science UHI for their unrivalled help and support throughout my final year.

“I’m now studying an MSc in climate change at the University of Copenhagen in Denmark, however SAMS UHI will always be my home university in my head and in my heart. You can take Sam out of SAMS, but you can’t take SAMS out of Sam.”

Professor Clive Mulholland, principal and vice-chancellor of the University of the Highlands and Islands, said: “Sam was an exemplary student and is a worthy winner of our 2016 Student of the Year title. Not only did he achieve excellent academic results, he also contributed to university life and to his local communities.

“Throughout his time with us, he displayed unfaltering passion and determination in everything he did. I would like to congratulate Sam on his achievements and wish him all the best for the future.”

Sam also won this year’s Tripartite Undergraduate Dissertation Prize, an annual UK award from the Challenger Society for Marine Science, the Institute of Marine Engineering, Science and Technology and the Society for Underwater Technology for the best project by a BSc student in marine science, engineering or technology.

SAMS UHI director, Professor Nicholas Owens, said: “It has been a particularly remarkable year for Sam, whose dissertation was chosen as the best in the UK among marine science students. To also win both student of the year prizes and train for a remarkable feat of physical endurance in his final year shows he is a student one comes across rarely in a lifetime.”

As Student of the Year, Sam was presented with a cheque for £400 at the SAMS UHI graduation ceremony in Oban.

After he has completed his MSc, he hopes to undertake a PhD looking into the mechanisms of thinning and retreating of the Antarctic Ice Sheet and how it will influence global sea level.