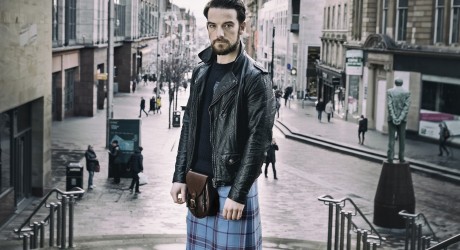 THE Royal Conservatoire of Scotland (RCS) starts its 170th anniversary celebrations in style… with the launch of a stunning new tartan.

Scotland’s national conservatoire has created the fabric to mark its milestone year and its world-class reputation for performing arts education.

The tartan, inspired by the rich history of the Conservatoire and its bold and dynamic vision, is modelled by Scottish actor and Conservatoire graduate, Kevin Guthrie, who stars in this summer’s World War II drama, Dunkirk.

The tartan will be formally adopted from Wednesday, January 25 when the Conservatoire opens the doors to its Creative Campus, a new purpose-built learning and teaching complex within the Renfrew Street building.

Every purchase supports scholarships for students.

The launch is the start of the Conservatoire’s historic 170th year which will be celebrated with gala performances and special events.

Established in 1847, the Royal Conservatoire of Scotland is one of the world’s most multi-disciplinary conservatoires, offering specialised teaching across dance, drama, music, production and screen. It is ranked sixth in the world for performing arts education and number one in Scotland for graduate employability, endorsing its status as a national and international centre of excellence for the performing arts.

From Charles Dickens and Buffalo Bill to honorary doctors, Emma Thompson, Tilda Swinton and Billy Connolly, there have been many significant moments – and people – to celebrate since 1847.

At the first official soiree, the inaugural address was delivered by Charles Dickens.

In 1892, the first professor was appointed, Madame Emma Ritter-Bondy, Professor of Piano. In 1953, our principal, Sir Ernest Bullock, composed the fanfares and arranged the national anthem for performance at the coronation of Queen Elizabeth II.

Professor Jeffrey Sharkey, principal of the Royal Conservatoire of Scotland, said: “What better way to begin our 170th anniversary celebrations than with the launch of a stylish new tartan which is showcased to terrific effect by our alumnus, Kevin Guthrie.

“The tartan, which incorporates the corporate blue of the Conservatoire, is a distinctive and modern design that reflects our creative and confident outlook. The tartan is a fantastic way to mark our special anniversary year and we look forward to seeing it being woven into the very fabric of life at the Royal Conservatoire of Scotland.”

Actor, Kevin Guthrie, who graduated from the BA Acting programme in 2011, said: “I’m delighted to launch the new Royal Conservatoire of Scotland tartan and be a part of it – it’s a really lovely, vibrant tartan.”

Kevin is part of the star-studded cast of Dunkirk which is released in July and directed by Christopher Nolan – of Interstellar, Inception and The Dark Knight Trilogy fame.

The actor has fond memories of his studies at the Conservatoire: “As a proud Scotsman and Glaswegian, this was where I wanted to study and use that as the platform moving forward.

“There’s a very famous energy that comes with the building at RCS. I remember the buzz that was kind of in the brickwork – it’s in the design of the school, it’s in the energy of the staff and students. There’s a real vibrancy about it.”

Kevin, who has a string of film credits to his name including Fantastic Beasts and Where to Find Them, Sunset Song, The Legend of Barney Thomson and Sunshine on Leith, added: “I think there’s something very specific about the training at RCS in that it’s a wide vocabulary of training and experience.

“RCS actors and alumni are known and recognised in the industry for being very open minded and very confident in their approach. There’s a real honour and a humility in an RCS actor, I believe, and I think that sets us apart.”