Media Release: Slide in to Glasgow Trombone Weekend, from 22 – 25 June 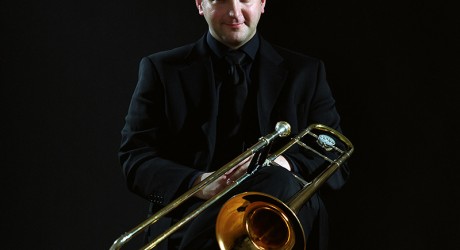 GLASGOW is to play host to leading brass virtuosi as international performers, including Christian Lindberg and Mnozil Brass, descend on the city for the Glasgow Trombone Weekend.

Swedish trombone soloist, Lindberg, will team up with the BBC Scottish Symphony Orchestra (BBC SSO) for the prestigious festival, which also features competitions and masterclasses with the British Trombone Society in the Royal Conservatoire of Scotland.

The events, which run from 22 until 25 June 2017, will take place in City Halls and the Royal Conservatoire, with students and staff from the institution among those taking part.

The following evening, Brabbins and the BBC SSO return to City Halls with Lindberg and Jörgen van Rijen, principal trombone player of the Royal Concertgebouw Orchestra in Amsterdam, where the programme will include Lindberg’s The Waves of Wollongong and the Aho Trombone Concerto.

Both events are preceded by Pre-Concerts in City Halls’ Recital Rooms, featuring short informal performances by students from the Royal Conservatoire of Scotland.

World-renowned brass septet Mnozil Brass returns to Scotland with its unique brand of virtuosity and humour on Saturday, 24 June. Cirque will showcase the ensemble’s reputation for stunning playing, improvisations and brilliant on-stage choreography in the plush surroundings of City Halls.

Trombone players will have the opportunity to pit their wits against each other during a day of British Trombone Society competitions in the Royal Conservatoire’s Stevenson Hall on Saturday, 24 June.

Liam Kirkman, president of the British Trombone Society, said: “June is shaping up to be an exciting month, as trombone players from far and wide meet in Glasgow for its Trombone Weekend.

“With so many terrific concerts, workshops and competitions to enjoy, I would encourage players of all levels of experience and ability to come along and enjoy this fantastic spectacle showcasing superstars from the brass and trombone world.”

Tickets for the events are on sale now, with attendees at the concerts in City Halls entitled to multi-buy discounts.

More information about events at the Royal Conservatoire is available by logging on to: www.rcs.ac.uk/glasgowtromboneweekend.

In 2017, RCS is celebrating its 170th birthday. During its existence, it has built on its roots as a national academy of music to become one of Europe’s most multi-disciplinary performing arts higher education centres, offering specialised teaching across music, drama, dance, film and production. RCS is encouraging trans-disciplinary learning throughout its innovative curriculum and throughout 2017, the institution will host a series of performances and special events recognising its rich history and world class reputation for performing arts education.

Around 1,100 students are currently pursuing degrees at RCS across its specialisms. The conservatoire works in partnership with the national companies including the National Theatre of Scotland, Scottish Opera, the BBC Scottish Symphony Orchestra and BBC Scotland, to provide students with the very best learning experiences the Scottish landscape has to offer.

Based in the heart of Glasgow, RCS is also a busy performing arts venue; it hosts more than 500 public performances each year and issues around 64,000 tickets from its box office annually. Additionally, RCS teaches over 3,000 part-time learners every year through its Junior Conservatoire and Lifelong Learning Departments.

About the BBC Scottish Symphony Orchestra

Formed in December 1935, the BBC Scottish Symphony Orchestra is Scotland’s national broadcasting orchestra and performs to large and enthusiastic audiences in venues throughout the country. It has been at the heart of the nation’s cultural life for many years and has a well-earned reputation for its creative ambition, its pioneering spirit and wide range of repertoire. It maintains a busy schedule of broadcasts for BBC Radio 3, BBC Radio Scotland, BBC Television, and online.

Based at City Halls in the heart of Glasgow’s Merchant City, the BBC SSO is Scotland’s leading champion of new music, and has established strong links with local communities through its thriving learning and outreach programme. It is a major partner in Big Noise, Scotland’s innovative project for social change through music, plays a major role in the BBC’s Ten Pieces initiative, and has a close association with the Royal Conservatoire of Scotland, working over a variety of disciplines with conductors, composers, soloists and orchestral players. As well as taking live music to towns and cities across Scotland, it appears regularly at the BBC Proms and Edinburgh International Festival and at other major festivals. In recent years the orchestra has toured to India, South America, China, Holland and Belgium.

Thomas Dausgaard became chief conductor in September 2016 taking over from Donald Runnicles who held the post since 2009 and is now Conductor Emeritus.

A past recipient of the Royal Philharmonic Society Award for Best Orchestra, the BBC SSO’s commercial recordings have received a number of prizes, including four Gramophone Awards.

Christian Lindberg’s achievements for the trombone can only be compared with those of Paganini for the violin or Liszt for the piano. Having premièred over 300 works for the trombone (including more than 30 composed by Christian himself), recorded over 70 solo CDs, and having an international solo competition created in his name in Valencia, Spain, Christian Lindberg is today nothing less than a living legend.

At an early stage of his career he joined Yo Yo Ma and Gidon Kremer as the BBC Music Magazine’s soloist of the year. In 2000, together with Louis Armstrong and Miles Davis, he was voted by an international poll the greatest brass players of the 20th century. He was the first Swedish instrumentalist ever to be invited to perform as soloist with the Berlin Philharmonic Orchestra and the Chicago Symphony Orchestra. And, in May 2007, he was artist-in-residence at the Musikverein in Vienna – the ‘stronghold’ of traditional classical music. Christian Lindberg has worked with practically every major orchestra and conductor in the world today. For a trombonist to achieve all this before turning 50 is, to say the least, remarkable.

Lindberg took up the trombone at 17 inspired by the jazz trombonist Jack Teagarden. At 18, he gained admission to the Royal College of Music in Stockholm and after having played for only two years he got a position as trombonist in the orchestra of the Royal Swedish Opera in Stockholm. At 20, he left the orchestra, and has since built up a unique and impressive career as the first trombone soloist in history, as well as embarking on two new enormously successful careers as conductor and composer.

As principal conductor and artistic advisor of the newly-established Arctic Philharmonic Orchestra, an orchestra with strong support from the Norwegian government, Christian Lindberg has conducted staged productions of Carmen and Bohème as well as taken the orchestra on several tours including a concert in the Mariinsky Concert Hall in St Petersburg upon invitation from Valery Gergiev.

Today Lindberg´s schedule is fully booked for years ahead. This schedule combines being chief conductor of the Nordic Chamber Orchestra and the Swedish Wind Ensemble with guest conducting of orchestras such as the Rotterdam Philharmonic and Giuseppe Verdi Orchestra of Milan, working on composition commissions from ensembles such as the Chicago Symphony Orchestra, the Australian Chamber Orchestra and the Swedish Radio Choir; and continuing his solo appearances with orchestras such as the London Philharmonic, the NDR Orchestra in Germany and Tokyo’s Yomiuri Orchestra.

The ‘Gasthaus Mnozil’ is in the famous 1st ‘Bezirk’ (quarter) of the City of Vienna, directly opposite the Music Conservatoire. Fate played a role and in 1992 seven young brass musicians were lucky enough to be able to take part in the regular music series held in the restaurant under the auspices of Josef Mnozil himself.

Soon, original folk tunes had become occasional pieces, without any need for the music. It appeals to all ages and stages of life: typical brass music: hit tunes, jazz, pop, opera and operetta. No sense of fear here, no reprisals for anything out of place, and all played with an open mind, typical Viennese ‘Schmäh’ (almost impossible to find an English equivalent, but best rendered as a kind of sarcastic charm), along with immense technical skills.

Mnozil Brass gives around 130 annual concerts now, all over the world: from the farthest reaches of the European continent to Israel, Russia, China, Taiwan, Japan, Canada, the US, and Australia. They play to full houses, at the famous Burgtheater in Vienna e.g. or the KKL in Lucerne, at the Royal Albert Hall in London, or the Tchaikovsky Conservatoire in Moscow, the Jahrhunderthalle in Bochum, the opera houses in Munich, Stuttgart, Wiesbaden and Leipzig, the Thalia Theater in Hamburg, the Düsseldorf Schauspielhaus and at the Berliner Ensemble.

As for the ‘Gasthaus Mnozil’? Well, they fill that too of course, but in a somewhat different way.

About the British Trombone Society

The British Trombone Society is now in its 31st year and promotes the needs and development of trombonists of all ages and styles whether professional, amateur or beginner. The BTS is the ‘go-to place’ for instrument reviews, new repertoire, interviews and advice from the best – in fact, anything and everything trombone related!

BTS members enjoy a host of benefits. The BTS website offers masses of material including demo tracks of exam repertoire and a regular magazine with the latest news and a light hearted approach to playing the trombone – essential for all trombonists.