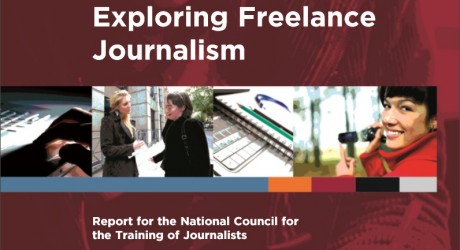 THE National Council for the Training of Journalists (NCTJ) has commissioned and published a 52-page report, Exploring Freelance Journalism, which provides independent, comprehensive labour market information about the freelance journalism sector and includes the results of a recent survey of more than 600 freelance journalists.

The UK economy has seen a significant rise in self-employment, and journalism now has one of the highest rates of self-employment of all occupations.

From 2000 to 2015, the number of freelance journalists has increased from 15,000 to 25,000, an increase of 67 per cent, with the proportion of journalists who categorise themselves as being freelance increasing from 25 to 35 per cent, compared to 15 per cent of all UK workers.

The research explores the reasons for the rise in freelance journalism.

It finds less than one-fifth (17 per cent) have been ‘pushed’ into self-employment, with 44 per cent saying they have been attracted into freelancing and 39 per cent believing it was a mixture of both.

The NCTJ’s research consultant, Mark Spilsbury, designed the research methodology and authored the report. It is intended to help the charity and its stakeholders understand more about the nature of freelance journalists, self-employment, skills and learning.

Freelance journalists responding to the NCTJ’s survey reported working an average of 34 hours per week, but the spread is large. A minority (13 per cent) work two days a week or less. A larger proportion work longer than 40 hours (23 per cent).

Freelance journalists identified the single biggest challenge as not knowing how much income they will have from month to month.

The data suggests that there may be issues regarding the skills of self-employed journalists.

Many (61 per cent) believe that they have skills gaps, with the most common area where new or additional skills are needed is in ‘business finding’ (37 per cent of these respondents want advice on pitching and networking), with 30 per cent saying they have skills gaps in new media, and 27 per cent in other media areas such as TV, video, photography and radio.

A quarter (26 per cent) say they need new technical skills, and a further quarter (25 per cent) say they have writing skills gaps. When starting out in self-employment, nearly three-quarters of freelance journalists wanted advice on financial matters and record keeping.

Freelance journalists are concerned about financial issues – irregular income, lack of security and inability to save – but appear to be happier with their work-life balance and more content in their lives overall due to flexibility, with 82 per cent not seeking to leave freelancing.

“Now that journalism has one of the highest rates of self-employment in the UK economy, the NCTJ must focus more of its work on providing accessible training and qualifications to meet the needs of modern freelance journalists.”

The full report is published on the NCTJ website, here.

About the National Council for the Training of Journalists

The NCTJ is the leading journalism training organisation. It accredits courses at education and training providers; offers qualifications which guarantee the skills needed in the workplace for entry-level students and trainees through to senior status; fosters continuing professional development for journalists, and provides a range of services and products relevant to its customers. The NCTJ also manages the Journalism Diversity Fund, a bursary scheme set up to support individuals from diverse backgrounds who do not have the financial means to attend NCTJ-accredited journalism courses.

MEDIA RELEASE issued by NCTJ. You too can share your stories (aka press or media releases), on allmediascotland.com. Email here for more information.