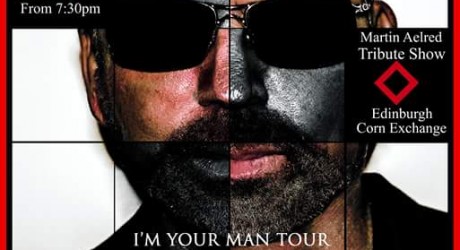 TOUCHED by the mighty career of George Michael, Scottish tenor, Martin Aelred, has created a tribute concert in honour of the world-acclaimed performer and his music legacy, titled the ‘I’m your man’ tour.

Join Martin to celebrate the life and career of one of the UK’s most talented and successful singer-songwriters at the Corn Exchange in Edinburgh on 25 February.

Martin’s stage set will echo the sounds of the time, with a 90’s-style band line-up with Paul Mills, Average White Band, on drums, bassist and sax players from Edinburgh Napier University and backing singers from the Glasgow Gospel Choir.

Martin will showcase a range of George Michael songs, sensitively crafted into the concert repertoire – including ‘Careless whisper’, ‘Father figure’, ‘Don’t let the sun go down on me’ and ‘I knew you were waiting for me’, and many others.

Commenting on this early career, Martin said: “I never told my tutor at the ENO but I used to practice George Michael songs as part of my daily vocal exercises, so it seems a fitting progression to play this tribute concert.”

Martin’s stage career began when he left his safe job in the building trade to sing and was classically-trained in opera which he can sing in five languages.

So more than a leap of faith and hard effort, feet firmly on the ground and a lot of determination, he has made his way into a highly-successful musical career that is taking him around the world.

Not the usual classical route and no stereotype, Martin is a musician with determination, cool streetwise-style and an ambassador for keeping community strong at the heart of society. He puts his love of singing at the heart of all he does – and marries that with his verve for making people’s lives that little bit better through music.

Martin has raised thousands of pounds for charity throughout his career and tells his story in a humble way whilst maintaining his gritty, edgy style that lets you know – he will deliver a truly engaging performance and merges it with a dramatic onstage performance that aims to make a lasting impression in memory of George Michael.

Through steely determination, Martin made his career a success with some 500 performances in six years – singing for the UN, HH the Dalai Lama, HRH Prince Charles, Pope Benedict. XV1 and on BBC, STV, Scottish Opera.

Martin tours the UK and performs internationally and was described by the Dalai Lama – for whom he performed in Dundee – as “the man with the beautiful voice”.

Between tour dates and media appearances – Martin has launched his own solo album, titled ‘Uomo’ and he performed live’ Dicitencello Vuje ‘ and ‘Solamente Una Vez ‘on The Riverside Show (2015) on STV.

Martin is also an inspirational speaker and has appeared on the film, ‘Lords of London’.

Tickets can be purchased direct from The Corn Exchange Edinburgh

MEDIA RELEASE issued by Interwoven PR. You too can share your stories (aka press or media releases), on allmediascotland.com. Email here for more information.