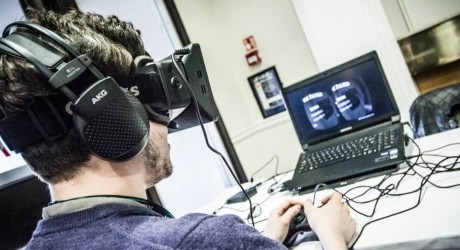 TEAMS of budding game developers are gearing up to create a digital or board game over one intensive weekend in Elgin.

For the fourth year in a row, Moray College UHI is the venue for the Moray Game Jam (MGJ).

The event, which sees teams of game developers make a game from scratch in 48 hours, will take place from midday on Friday 17th March to midday on Sunday 19th March.

The event is being organised by a partnership comprised of XpoNorth’s screen and broadcast network, ScreenHI; Moray College UHI and Elgin-based games studio, Hunted Cow Studio.

The public is also being offered the opportunity to participate in the weekend’s activity.

A full day of workshops will take place on Saturday 18th March, while a pop-up gaming playground which will offer gamers the chance to test the games the teams have been creating will be set up at Moray College UHI on Sunday 19th.

Industry experts from across Scotland will deliver gaming workshops on the following:

How NOT to make a game… by Brian Baglow, founder and director at Scottish Games Network.

How to Create a Mobile VR game in Unity by Stuart Gray, programmer at Hunted Cow Studios Ltd.4:30 – 5:00pm

Head to the Moray Game Jam website www.moraygamejam.com to register for any of the FREE workshops above before 16th March.

All young people who are 14 or under should be accompanied by an adult.

A record number of applications for the 48-hour game creation have been received this year and a waiting list has been put in place. However, there are still places left in the workshops on Saturday 18th.

Amanda Millen, director of XpoNorth’s Screen and Broadcast network, ScreenHI, which is co-organising the event said: “Moray Game Jam has become one of the go-to events in Scotland for game developers.

“It opens doors and widens knowledge about how to forge a career in this hugely-competitive and exciting creative industry.

“Scotland is a world leader in games development, and the existence of companies like Hunted Cow Studios in Elgin, and the growing interest in the Moray Game Jam reinforces the fact there is a vibrant scene in the Highlands and Islands region.

“The event will provide a key opportunity to gain valuable experience and network with like-minded individuals and leading industry figures.

“We look forward to working with them all to develop the next generation of gamers from Moray.”

Moray College UHI principal, David Patterson, said: “We are delighted to be the host for this increasingly popular event. This year, we have seen a record number of applications from across the country and it is clear that the Moray Game Jam is here to stay.

“The Alexander Graham Bell Centre for Digital Health, situated on our Moray Street campus, lends itself perfectly to this event.

“There are still spaces available on a number of workshops that are free to attend; this is a great opportunity for our students, school pupils and the public to get insight into the different aspects of game development and art.”

They went on to release their game Everything is Peachy after an intense six-week mentoring period last summer in Elgin with Hunted Cow Studios.

The board game category was won in 2016 by a group of three Abertay University students, all originally from Moray, who came together as the Marvellous Axe Giants. Their horror board game, Lantern, Lost in the Dark, is now in development.

Funded by Highlands & Islands Enterprise and the European Development Fund, it provides unique training and networking opportunities and encourages local economic activity within the screen and broadcast sectors.

Hunted Cow Studios is a leading game developer and publisher which was founded in 2003 with the goal of producing fun and accessible games, but with a layer of deeper and engaging gameplay for experienced players. Their most popular browser game is Fallen Sword which has attracted over four million players since its launch in 2006.

Andrew Mulholland graduated from Abertay University in 2003 after studying Computer Games Technology and went on to form Hunted Cow Studios with Glenn Murphy. He has over ten years’ experience in the industry and has helped bring successful games such as Gothador and Fallen Sword to market.

Moray College UHI has been developing and expanding its range of courses since the inception of the University of the Highlands and Islands in 2011. The status of university provides greater opportunities for the college to develop its research activities and contacts with local industry. The new Moray Life Science Centre, known as the Alexander Graham Bell Centre for Digital Health, is a recent addition to Moray College UHI. This £6.5 million project funded by Highlands and Islands Enterprise, NHS Grampian, European Regional Development Fund and Moray College UHI provides facilities for, and expertise in, life science research and education bringing together academia, research and business under one roof.

The college offers a broad range of courses covering many subject areas which is continually expanding, particularly within the Higher Education sector and prospective students can now study up to Masters and PHD level. The college also continues to offer courses from pre- employment training through all levels of Further Education.

This ensures that locally, prospective students can access education at any level to match requirements, abilities and qualifications.  Many courses are offered on a flexible, part-time as well as a full-time basis to suit students’ learning needs. Many students want to improve their qualifications or skills in order to gain employment or to improve their employment prospects. Others want to study for a qualification that they intend to use as a stepping stone to a higher qualification. Some will register for courses simply for leisure and interest. Moray College UHI can offer it all.

Game Jams provide a great platform to design, develop, create and test a new game – all in 48 hours – a true challenge, offering an opportunity to connect and collaborate with like-minded people, experiment and innovate, whilst building portfolios for a growing industry.

A Game Jam is a competition to create a new video game – and in some cases a board game). It usually involves the coming together of groups of individuals with an interest in or experience of video gaming either through programming or design.

Usually entering in teams, participants will not be aware of the theme until they arrive at the competition, the structure of which is common throughout the world.

Teams meet on a Friday afternoon and spend 48 hours creating a new idea/ concept based on the theme of the specific games jam.

A game jam may be centred around a theme, which all games developed within the jam must adhere to. The theme is usually announced shortly before the event begins, in order to discourage participants from planning for the event beforehand and from using previously-developed material. Themes are meant to place restrictions on developers, which encourages creativity.

Head of marketing and external relations

MEDIA RELEASE issued by Xpo North. You too can share your stories (aka press or media releases), on allmediascotland.com. Email here for more information.