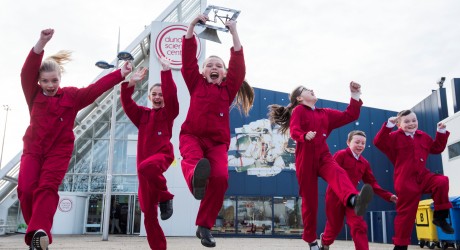 MORE than 100 young people from 17 local schools got stuck in to science and engaged in engineering on 3 March 2017 at a Celebration of Engineering & Science in the fitting location of Dundee Science Centre.

The atmosphere was electric at the Celebration, run by Young Engineers and Science Clubs (YESC) – a project of the Scottish Council for Development and Industry (SCDI) – and partnered by Shell U.K. Limited.

Shell, brightsolid, Michelin, BT Scotland, Royal Navy, and The University of Dundee, were among nine organisations attending the event at Dundee Science Centre to inform young people of the wide range of careers in STEM.

Jane Martin, programme director of Young Engineers & Science Clubs, said: “The main purpose of YESC is to spark pupils’ interest in science and engineering through engaging them in practical and exciting challenges.

“It’s fantastic to see the broad range of projects they’ve been working on and celebrate their achievements. Our aim is to inspire the next generation of explorers, scientists and engineers.”

Shell is a long-term partner of YESC.

David Burgess, plant installation manager Fife NGL, Gas Plant, Shell U.K. Limited, said: “Today’s event highlights not only the enormous amount of talented young engineers and scientists in the area, but the enthusiasm and excitement they have for the subjects.

“Shell’s work in partnership with the SCDI Young Engineers and Science Clubs plays a critical role in providing resources to schools across Scotland that will ensure a new generation will continue Scotland’s legacy of innovation in science and engineering industries.

“Congratulations are due to the participating pupils and teachers for their obvious hard work on these great projects.”

YESC supports more than 200 schools in Fife, Dundee, Perth/Kinross and Angus with grants and resources to help nurture Scotland’s next generation of scientists and engineers.

The programme is supported locally by Shell U.K. Limited, as well as many private and public sector partners.

Since 1987, the Scottish Council for Development & Industry has pioneered the Young Engineers & Science Clubs programme in over 1,400 schools across Scotland, involving over 30,000 young people each year.

The aim of the programme is to engage and excite young people about science, engineering and technology by encouraging them to exercise their creative, problem-solving, team-working and innovative skills through exciting, hands-on projects. www.yecscotland.co.uk @scdiYESC