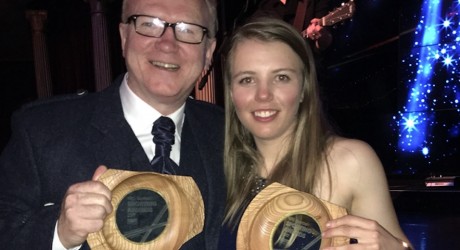 SKIER, Nicole Ritchie, is celebrating, after a resounding win at the Nordoff Robbins Scotland Sporting Awards.

A member of Glasgow Ski Racing, Nicole (pictured with football’s Alex MacLeish) landed the award after being voted best in class by the general public.

Nicole Ritchie said: “I was delighted when I found out I’d won. It came as a total surprise to me and I don’t think it’s sank in yet.

“When I won the treble in the Scottish Indoor Champs two years ago I thought that was as good as it was got, but this feels even better.

“The fact that this was voted by the public just makes it extra special. When I heard that I was up against Danny MacAskill, Kriss Kyle and Katy Winton, I didn’t think I stood a chance. I’ve never been happier to have been proven wrong.

“I was asked to produce a video on Friday morning as I was racing on the Friday but my coach suggested I jump on a plane and fly over – as Saturday and Sunday were rest days before my next race on Tuesday.

“I’d like to thank my sponsors, QTS Group and Rossignol, for all their support.

“Without them, this would never have happened. I’m also hugely indebted to Julie and Mark Vinter from Glasgow Ski Racing who encouraged me to take up competitive Alpine skiing back in 2000.”

The awards ceremony was held on Friday March 10 at a star-studded event at Edinburgh’s prestigious Prestonfield House Hotel.