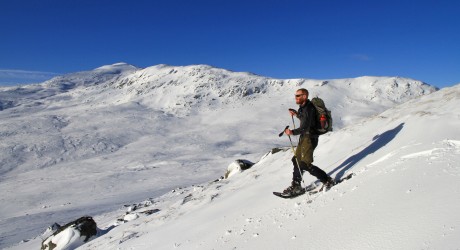 JOURNALIST, blogger and countryside ranger Ben Dolphin has been named president of Ramblers Scotland, the representative body for Scottish walkers.

He follows in the footsteps of the late conservationist Dick Balharry, award-winning broadcaster, Cameron McNeish, and, most recently, Dr Andrew Murray, who was the Scottish Government’s first Physical Activity Champion.

Ben is a West Lothian Council ranger and well known in the Scottish outdoor scene for writing for the Walkhighlands website and Outdoor Enthusiast magazine, as well as for his blogs, photos and videos on his own Benvironment website.

He was elected to the honorary position at Ramblers Scotland’s AGM on Saturday (11 March) in Dunblane.

Ben, who is aged 41 and lives in the Lomond Hills in Fife, is planning to use his presidency to encourage even more people to explore Scotland on foot.

He said: “Being put forward as president of Ramblers Scotland is a huge honour for me. In my personal and working lives I’ve seen first-hand how time spent around nature has enormous physical and mental benefits, whether it’s the blanket bogs of Sutherland or an urban park in West Lothian. Much of my time is therefore spent encouraging folk to get out and about.

“As president of Ramblers Scotland, I hope to be able to do just that by showing people the amazing wildlife and landscapes we have right here at home, not just up in the Highlands but right outside our front doors. I’ll also continue to speak up for our wild places and progressive access rights, which should never be taken for granted.”

Ramblers Scotland convenor, Alison Mitchell, said: “It’s wonderful to have Ben Dolphin on board as our president. His passion for walking, landscape and outdoor access, together with his respected position within the Scottish outdoors scene, will help us deliver the wide range of exciting campaigns and projects we have planned in the coming year.”

The great outdoors has been a part of Ben’s life for as long as he can remember – from exploring the beaches and coves of the Cornwall coast on family holidays, to night hikes with the Scouts over the Malvern Hills, and eventually to solo hillwalking in Wales, Scotland and beyond.

Ben grew up in the English Midlands and has previously volunteered with the Pentland Hills Voluntary Ranger Service, Falkland Centre for Stewardship and the Fife Red Squirrel Group.

The position is elected on an annual basis, with presidents serving for a maximum of three years.

For further information please call the Ramblers press office on 0131 472 7006 or 07557 527607 (out of hours). Alternatively, please email danny.carden@ramblers.org.uk or visit www.ramblers.org.uk/scotland

Ramblers Scotland has around 6,500 members and 55 local groups across the country, run entirely by volunteers. As the representative body for walkers in Scotland and a governing body of sport we work to promote walking, secure and facilitate access, and to develop path networks. We are part of the Ramblers, Britain’s walking charity.

MEDIA RELEASE issued by Ramblers Scotland. You too can share your stories (aka press or media releases), on this site. Email here for more information.