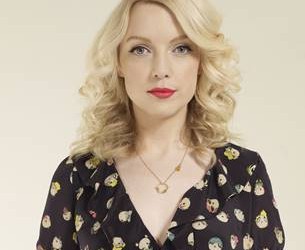 BROADCASTER, Lauren Laverne, is to host one of the Edinburgh International TV Festival’s popular controller sessions.

Laverne will come face to face with ITV’s Kevin Lygo at August’s event, chairing the hour-long new-look session which includes both a Meet the Channel as well as Meet the Controller segment.

The 2017 format invites broadcasters to showcase their shows, their teams and their talent, providing an opportunity to convey both their commissioning needs as well as their unique brand identity to delegates.

The second part will revert to the more traditional format of Meet the Controller in which Laverne and Lygo will discuss in more detail the channel’s strategy, its strengths and weaknesses and where it fits within a changing and increasingly competitive landscape.

Laverne, who began her career in indie band Kenickie while still at school, is a keen supporter of new talent and the Festival’s own efforts to support rising stars through its talent schemes, Ones to Watch and The Network.

She said: “The Edinburgh International TV Festival is the biggest event on the British television calendar but also an amazing charity, encouraging people of all backgrounds to get involved in making TV. I’m excited to be a part of it.”

Both talent schemes are now open for entries: http://www.thetvfestival.com/talent-schemes/

Laverne moved into broadcasting in 1998 and has built an illustrious radio and television career. As well as hosting a daily show for BBC Radio 6 Music, she has presented shows such as Transmission, The Culture Show, 10 O’Clock Live and coverage from Glastonbury and the Turner Prize Awards. She also curated and hosted six Late Night Women’s Hour discussions for BBC R4 which now airs as a monthly series.

Commenting on the Controller session, Laverne added: “ITV has had a huge year. Kevin has come in, they’ve launched The Voice and The Nightly Show, while X Factor and I’m a Celeb…continue to evolve. I’m looking forward to getting Kevin’s take on everything that has happened and what comes next…”

Festival director, Lisa Campbell, said: “Our focus this year is to showcase exciting names, different stories and fresh talent and we’re delighted to welcome Lauren to the fold.

“We’re huge fans of her radio show in the festival office and we’re looking forward to announcing more high-profile talent who’ll make their festival debut in 2017.”

The ITV session will be produced by Koulla Anastasi, programming director for Lifetime and Crime and Investigation channels.