Media Release: BBC One to serve up another series of Still Game 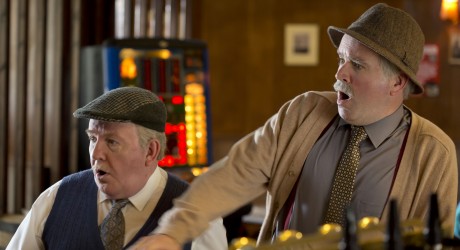 ICONIC comedy series, Still Game, is to return for another series, following the success of its long-awaited return to TV screens last year.

Written by and starring Ford Kiernan and Greg Hemphill, series eight has been commissioned by Shane Allen, controller (comedy commissioning), and will return as another six-part series, airing on BBC One in 2017.

The series will also film, on location, in and around Glasgow.

Comedy fans across the country celebrated the show’s return after a nine-year hiatus which saw it go straight to BBC One network for the first time.

In Scotland, the last series of Still Game became the most watched non-sporting programme in over a decade with weekly episodes regularly attracting over half of the total audience.

Creator, writer and star of Still Game, Greg Hempill, says: “We can’t wait to get started on the next batch of adventures with Jack and Victor. We have lots of surprises in store for you!”

Ford Kiernan, adds: “Chuffed to bits to be coming back for series eight. Greg and I have been cooking up some absolute corkers and we can’t wait to show you what they are.”

Shane Allen, controller (comedy commissioning), is delighted Still Game will return for a new series: “It’s rare for a show to attain the status of comedy classic whilst it’s still on air.

“Ford and Greg are at the height of their creative powers and audiences all over the UK just adore their world with these fantastic characters. If previous audience figures are anything to go by let’s hope the national grid can handle the demand.”

The new series of Still Game will be a BBC Studios production for BBC One through BBC Scotland.

The original run of the sitcom – which stars Kiernan and Hemphill as evergreen Glaswegian pensioners, Jack and Victor – aired for six series between 2002 and 2007, transferring from BBC Scotland to BBC Two.

The new series of Still Game will air on BBC One when it returns later this year.