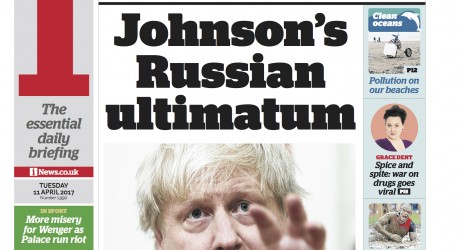 TODAY marks one year since i, Britain’s first and only concise quality newspaper, was acquired by Johnston Press.

The last 12 months have seen i’s trademark impartial and informative journalism rewarded on the newsstand with a +five per cent increase in circulation, bucking the industry trend with the national newspaper sector averaging a decline of nine per cent (ABC Apr – Dec 2016 vs. 2015).

Daily readership was boosted by a further four per cent after the referendum in June to 541,000 (July 2016 ABC).

The i’s advertising sales team has also celebrated success over the past year, with the number of advertisers increasing by 88 per cent in the six months leading up to Feb’17.

New clients for the title include FedEx and Debenhams.

The Saturday edition of i has also displayed record growth, with circulation volume up 13 per cent year-on-year (April’16 – Mar’17).

Almost one year on from the launch of inews.co.uk on 14th April 2016 – designed to mirror the layout and culture of the print edition – the website has enjoyed consistent growth, reaching an average 1.4 million unique monthly users by the end of 2016.

i recently signed its first ever TV sponsorship deal with UKTV’s Dave, with the title’s red ‘i’ logo brought to life in a sequence of news-related sketches – including Trump, Brexit and North Korea.

Richard Thomson, publishing director, said: “As we wrap up the first year of Johnston Press ownership of the i, it’s fantastic to see the title bucking industry trends and posting encouraging results across both print and digital channels.

“We are also equally excited about future plans for the title, as we enter into a new sponsorship deal with i-branded idents on Dave and prepare to act as the official media partner of the first UK-wide Politics Festival in June.”

Johnston Press is one of the UK’s largest newspaper publishers, with brands including i, The Scotsman, The Yorkshire Post and Belfast News Letter. Our content leverages i’s newsroom and global perspective alongside the expertise from our portfolio of over 900 journalists across the country, providing news and information services to our local communities at a national level.

Our news brands – both online and in print – now touch the lives of more than 32m people nationally each month and, through our continued focus to accelerate our digital offering, we’re able to deliver national and regional advertisers a highly-successful platform to link them directly with local audiences.

MEDIA RELEASE issued by W Communications. You too can share your stories (aka press or media releases), on this site. Email here for more information.