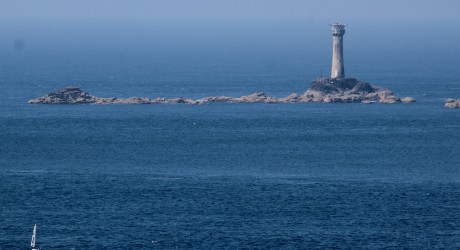 Crazy? Brave? Adventurous? Courageous? Pick your own adjective to describe Ken Fowler’s daredevil dash up the west coast of UK; single-handed, in a tiny sailing dinghy.

Sacrificing his entire annual leave for this epic adventure, and only just under half way into his gruelling challenge, our intrepid sailor already has a back catalogue of tales to last him a lifetime.

Already heading for Port Patrick, Ken Fowler (51), kicked off his mighty challenge to ‘Race to Scotland’ in aid of Oakhaven Hospice and Cancer Research in a boat no larger than two bath tubs.

Hoping to complete the ‘race’ in less than 34 days, and an official competitor in the Length of Britain race where he stands to win a bottle of gin if he completes it, it was family and friends who saw him off at Land’s End 15 days ago – setting sail under clear blue skies but in little wind.

Initial progress was agonisingly slow, taking three days to sail up the beautiful Cornish coastline in light headwinds and these conditions did not improve for his long voyage from Cornwall to Wales across the Bristol Channel.

Day four, now known as Big Wednesday, saw the sailor, after 12 hours at sea, becalmed and alone in the dark, 12 miles from his destination on the Welsh coastline.

Fully equipped with a Garmin tracking device and an ICOM VHF radio, RNLI Tenby were finally hailed and were by his side in minutes, putting their hydraulic winch to good use to lift the dinghy out of the water then whizzing Ken to shore at Freshwater East, where, in the absence of his support team – stuck three hours away with his bed, his trailer and a change of clothes – he was met by the coastguard service who soon magicked him up a bed for the night.

Taking a little recuperation time, it was sails down and feet up as the weather and the sailor took time to re-energise before heading back on the water to tackle the run up from Aberdaron and along to Fishguard and Holyhead then over to Port Erin on the Isle of Man.

Awaiting Ken were a few days of sailing which were nothing short of fast, furious, dangerous and difficult, whilst being spectacularly beautiful and awe-inspiring at the same time.

The route took Ken along vast stretches where the mountains of Snowdonia meet the coastline, recounted by Ken as “utterly breathtaking”, but which also saw him go barrelling through some almighty overfalls, the tumultuous waters of which he described as “barely survivable” forcing him to dig deep to find the drive to point the boat at ten-foot washine machine tumble of confused water and sail straight through it.

Heading into Milford Haven, on day seven, after a long day running the white water gauntlet on many occasions, near disaster struck.

Sailing in such pounding conditions against a headwind for a sustained period of time took its toll on both the exhausted sailor and the boat.

With the harbour in sight, the pin holding the mainsheet block gave way, sending the boat into a very unhappy roll tipping the now unstable RS Aero one degree too far and causing the inevitable.

With barely the time to recover from the unwelcome swim, our sailor looked ahead to find himself face-to-face with a massive oil tanker bearing down on him, dwarfing his tiny vessel.

Cue some very fast thinking and speedy evasive action and Ken squeezed clear of the tanker with seconds to spare and so, with a pending repair, the capsize duck broken and visions of terrifying overfalls whizzing through his head, it was one relived sailor who made land at Dale that night.

This was not to be Ken’s only unlucky meeting with very large vessels.

With a 4.30am start from Holyhead, rigging the boat under the light of a street lamp, in drizzly conditions, Ken launched on to the Irish Sea in light winds.

But soon enough, Holyhead marina received a very panicked call – not ten minutes into the journey – as Ken, with very little propulsion, was sitting plum in the transit line of an incoming large ship.

After being informed that he would be invisible to the ship, it was a great relief to see it then slow slow, allowing Ken to steer clear.

We can only assume the marina made contact with the ship’s captain and power gave way to wind.

The crossing to Port Erin threw the full works at Ken, initially setting sail in calm conditions then passing through periods of torrential rain and ending in boat-flattening squalls.

Heading for Peel, to end his exhausting day at sea, the swell was now sizeable and – to add to that – a squall blew in that Ken says forced him “to cling on for dear life”, as the tracking device clocked the boat flying at 9.1knots.

To add to this, heading straight for him once more, was another large vessel. This time Ken pointed straight at the beach and let his tiny boat take him home.

It was again a very happy sailor that landed that evening, ahead of another break, this time forced upon him by poor weather conditions.

Today, Ken will be closing the door on his English/Welsh odyssey and will be heading to Port Patrick hopefully arriving around 4pm ready for his big Scottish adventure through the Isles, their tides and their wilds.

Talking from Port Erin yesterday Ken said he will be “over the moon” to make Scotland and is “excited to see the incredible coastline and hopefully some of the unique wildlife” as his trip progresses.

He has already spent many a wonderful moment with dolphins in Cardigan Bay, seals along the Cornish coastline, a spectacular flock of guillemots nesting in the cliffs of Peel and a great many jellyfish.

Next on the list, he hopes to see the famous white tailed eagles or perhaps even an orca or two.

As he is now a past master at surfing into beaches, ploughing through overfalls, surviving boat flattening squalls and avoiding big boats, the RS Aero and its helm are more than ready to see what the west coast of Scotland has to offer.

Ken is sailing in memory of his father, Eric, who died of cancer aged 50 and Ina, his mother-in-law, who also taken by the disease.

So far, he has raised over £18k both off and online.

The people the RTS Team have met along the way have been incredible. There have been locals replacing valuable food provisions discourteously thieved by badgers in a 3am raid, campsites offering pitches and facilities for free, local sailing clubs lending RIBS and facilities, fellow boat owners providing company on the water and the RNLI and the coastguard service keeping Ken safe and sound while he takes on all that nature can throw at him.

Stuart Amey, senior local fundraising manager with Cancer Research UK, said: “We wish Ken all the very best for this most ambitious of sailing adventures.

“Ken is also aiming high with his £50,000 fundraising target and so we hope that everyone around Scotland will support him by making a donation. The money Ken raises will help Cancer Research UK scientists find better and kinder treatment for cancer.”

You can follow Ken live on his ‘trusty tracker’ as he puts himself out there for Oakhaven Hospice and Cancer Research via http://racetoscotland.co.uk/where-is-ken or check out his Facebook page for photos and blogs.

For further information on the Length of Britain Challenge and Sail Scotland, contact Gordon@gordonritchiemarketing.co.uk