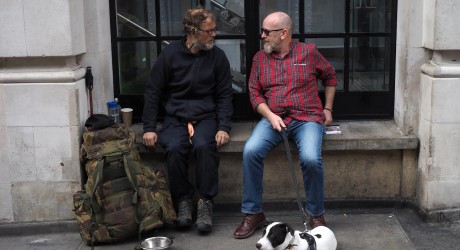 BORDERLINE, the London-based charity helping Scottish people, has received a Go For It main grant from the Church of Scotland.

The first round of these grants in 2017 brings the total amount donated by the grant to good causes to nearly £5 million in the five years since the fund was created by the General Assembly.

Borderline chief executive, Shona Fleming, said: “Borderline is delighted and extremely grateful to receive Go For It Funding from the Church of Scotland. The grant will fund half of our Scottish outreach worker project for three years.

“This project is vital to Borderline’s work with homeless Scots in London, as we are able to reach some of the most vulnerable and entrenched rough sleepers.

“With this multi-year funding, we are able to plan for the future and strive to meet our vision that every Scot in London will have a home and receive the support they need to lead a healthy, independent life.

“Borderline is also very pleased as we trace our origins to the Caledonian Christian Club and later to the Church of Scotland London Advisory Service (COSLAS).”

It is estimated that homelessness in London has increased over 50 per cent in the past five years.

Borderline’s own research – in 2012 – found that Scots represented seven per cent of the UK homeless population and by 2013, this figure had increased to 12 per cent.

The research identified priority support needs such as alcohol and/or drug misuse, as well as complex mental health problems.

Borderline provides homeless Scots a connection to Scotland, access to accommodation in London and specialist support.

Ministries Council convener, Rev Neil Glover, said: “Go For It has just chosen ten organisations to receive the first round of grants for 2017, which total £356,084 – with homelessness charity, Borderline, securing this spring’s largest Go For It main grant.”

Right Rev Dr Russell Barr, former Moderator of the General Assembly of the Church of Scotland and founder of the homelessness charity, Fresh Start in Edinburgh, said: “Having visited Borderline last November, during my Moderatorial visit to London, I was delighted to learn that they have been awarded funding from the Church of Scotland’s Go For It fund.

“Borderline offers invaluable support to Scots who find themselves homeless in London.

“Homelessness remains a stain on our nation’s life and the Go For It funding will make a big difference to the services Borderline is able to offer some very vulnerable people.”

MEDIA RELEASE issued by Borderline. You too can share your stories (aka press or media releases), on this site. Email here for more information.