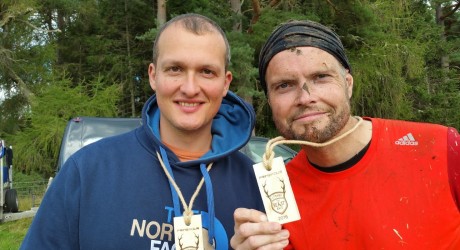 JOIN Calum Macaulay and Niall Iain MacDonald as they explore Scotland’s four canals – by boat, by boot and by bike!

Along the way, Calum and Niall Iain meet those whose livelihood depends on the canal, even visiting a floating hotel, and hear from those who choose to live on, or near the water.

In a new, four-part series on BBC ALBA, the pair discover the wonders of these waterways, meeting those who are passionate about their heritage and learn about their historical uses and the important role they play in today’s leisure industry.

Always up for a challenge, the boys sample some of the many water pursuits that can be enjoyed on the canals – they take on the mighty Beast Race on the shores of Loch Ness, have a go at wakeboarding along the Forth & Clyde Canal and compete in a cardboard boat race on the Union Canal – but will their boat get too much of a soggy bottom to finish the race?

The Kelpies are the world’s largest pair of equine sculptures and the soaring steel guardians of the canal extension linking the Forth & Clyde Canal to the North Sea, and BBC ALBA was given exclusive broadcast access as part of a Kelpies’ health check.

Each has 18,000 individual parts and Calum joins the maintenance team climbing to the top of the ‘head up’ Kelpie, the tallest of the two steel horses which sits 30m high.

Calum discovers he has a fear of heights as he climbs inside the structure to find that the only way down is by abseiling.

Also with a fear of heights, Niall Iain takes a trip on the Falkirk Wheel, an incredible feat of modern engineering that brings much valued tourism to central Scotland.

On the Caledonian Canal, the boys take charge of their own 40ft cruiser, leaving Caley Marina in Inverness for a couple of days sailing down beautiful Loch Ness, before taking to their bikes along the Great Glen Way.

Calum is in ‘Commando country’ as he visits Spean Bridge War Memorial, while Niall Iain finds out how electricity finally came to the Highlands as he travels to Mucomir hydro-electric power station, which has now been supplying power to the grid for 55 years.

Calum also joins the team onboard the Scottish Highlander, a Dutch barge converted into a luxury floating hotel which offers cruises from Inverness to Banavie, Fort William.

On the Crinan Canal, known as Scotland’s most beautiful shortcut through stunning Argyll, the boys assist some of the many yachts making their way to the Western Isles.

Starting off his journey in Tarbert, Niall Iain joins boatbuilder, Phil Robertson, onboard his restored ring netter up Loch Fyne to Ardrishaig, whilst Calum visits Dunadd, seat of the ancient kingdom of Dalriada which boasts stunning views of Moine Mhor and over to the canal itself. Niall Iain catches up with local author, Marian Palmister, who has written a new book on the history of the Crinan Canal and Calum hears from lock keeper, David Provan.

The pair’s last adventure on this waterway sees them join the Mid Argyll Coastal Rowing Club for a beautiful evening row across Crinan Bay, taking in the stunning scenery and learning a few helpful tips along the way.

After a spot of coastal rowing and city centre canoeing, the boys are happy to relax on their own canal barge for a few days, sailing from one great river to another, along the Forth & Clyde Canal.

Having experienced living on the water for a few days, Calum meets up with musician Jennifer Ewan who has given up her Edinburgh flat to live on the water, calling her barge “her little dream home”. Jennifer takes inspiration for her songs from the nature she is surrounded by, even shooting a music video on her house boat along the Union Canal.

Calum visits the Forth Canoe Club, where the Downie family share their passion for watersports and Niall Iain has a go at pulling oars on the Union Canal with Rachel, a member of the St Andrew Boat Club, who’s aspiring to be as successful as the club’s most famous member, Olympic gold medallist, Dame Katherine Grainger.

Writer and poet, Aonghais MacNeacail, shares his memories of the Union Canal from his days in Edinburgh, in particular it’s transformation from dereliction to beautiful walkways and cycle paths today and at the Falkirk Wheel boating pond, Niall Iain hooks up with Professor Donald Meek with his scale model of the Claymore, and they recall the old MacBrayne ferries.

The canals offer a great sanctuary for those keen to escape every day stresses and throughout the series the boys meet up with various charities offering canal based projects to help those with physical and mental disabilities.

Calum meets up with Stephen Wiseman of the Scottish Waterways Trust who run ‘Nature Walks for Wellbeing’ along the Caledonian Canal aimed at people from the Inverness area, whilst Niall Iain joins the Seagull Trust Cruises, which aims to support people in and around Edinburgh with special needs, offering trips along the Union Canal.

Scotland’s canals have benefited over recent years from the hard work of dedicated volunteers including Barbara Braithwaite who is a lifelong member of the Linlithgow Union Canal Society and was awarded an MBE for her efforts. Barbara recalls many clean ups along the canal, saying: “We have found dead dogs, cats, shopping trolleys and we even thought we had found a dead body but it was just a woman’s bra filled up… even the kitchen sink.”

A little help from the Millenium Fund has also seen Scotland’s canals being transformed into green pathways to be enjoyed by all.

Produced by Eyeline Media for BBC ALBA, Air a’ Chanàl / Scotland’s Canals starts on the channel on Thursday 8 June at 9.00pm and consecutive Thursdays thereafter.