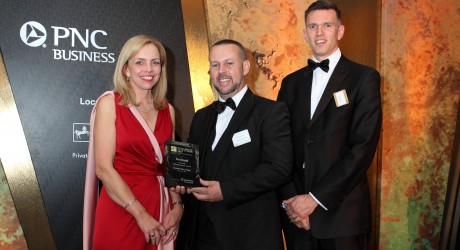 Keenan Recycling, which is headquartered in New Deer, and has an office in Linlithgow, was named as growth management team in the annual awards held to celebrate the achievements of UK companies supported by private equity and venture capital funds.

Keenan Recycling launched its commercial food waste collection service in Aberdeen and Aberdeenshire in 2010 and now processes more than 60,000 tonnes of waste each year, transforming it into British Standards Institute accredited compost.

The company, which boasts a 14-acre facility at New Deer, near Turriff, opened its second base at Linlithgow in August 2015 and has invested £1.2m in a fleet of lorries to roll out its award-winning organic waste collection service to customers in Edinburgh and Glasgow.

Judges were impressed by Keenan Recycling’s continued growth in the central belt, which was fuelled with a £2.2m investment from BGF (Business Growth Fund) in 2015, supporting the business to increase its food waste collection in the south of Scotland from 600 customers to more than 7,000 customers Scotland wide.

Grant Keenan, managing director of Keenan Recycling, said: “Being recognised in the BVCA awards is a fantastic accolade for Keenan Recycling. Scotland is home to some truly inspirational businesses, and it is a great honour to be named as one of the top growth companies.

“Keenan Recycling has gone from strength to strength since its establishment, and we are committed to growing the company not only throughout Scotland, but also south of the border in the coming months.”

“The investment and partnership with BGF has supported further growth and brought in some experienced advisers. The business is now set to expand across additional regions.”