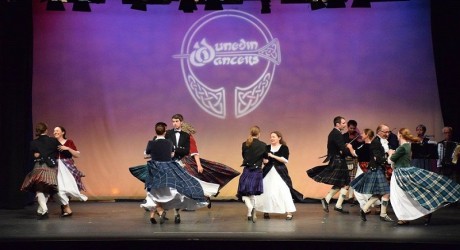 NEXT week, there’s the opportunity to see Spain, Croatia, Polish, Chinese and Scottish music and dance – all in one place.

The occasion is the 24th Dunedin International Folk Dance Festival, with indoor and outdoor performances in Edinburgh, Anstruther, Falkirk and the Kelpies, Perth and Stirling Castle 16-22 July.

The Church Hill Theatre Gala Concert in Edinburgh is one of the highlights of the festival, with performances from ‘Varaždinski folklorni ansambl’ – a folk dance ensemble from Varazdin, Croatia and ‘Balladors des Raiguer’, a recently-formed group of experienced dancers from Majorca, Spain.

These two groups will bring their traditions of music and dance from their countries to perform alongside Edinburgh-based dance groups, featuring the range of Scottish dance – country dancing, highland, hard shoe stepdance and ceilidh plus ‘Ojczyzna’ – a local recently re-formed Polish dance group and the Edinburgh Chinese Arts Association.

Festival spokesperson, Fiona Campbell, said: “The concert and other performances will be fabulous opportunities to hear the different musical traditions and see the various different dance styles and costumes. And we are so pleased that we are able to take this experience to other places besides Edinburgh.”

They acknowledge the funding support from the Tasgadh Traditional Arts Small Grants scheme administered by Fèisean nan Gaidheal with funding from Creative Scotland.

They also acknowledge the assistance of the Edinburgh Academy Junior School who is helping provide the home base for the festival this year.

For any further enquiries or photo requests please contact Fiona Campbell 0795 191 8366 or publicity@dunedindancers.org.uk

Sunday 16 July: FALKIRK The Falkirk Wheel and The Kelpies* Scotland, Spain, Croatia and Poland will be performing at various times between 1.30-4.30pm – free

Monday 17 July: EDINBURGH The Mound*  Scotland, Spain and Croatia will be on the pedestrian area beside the National Gallery 1.30-2.30pm – free

Thursday 20 July: PERTH and ANSTRUTHER* Scotland, Spain and Croatia will be dancing in King Edward Street from 11.30am-1pm, then on to Anstruther with dancing at the Harbour from 5-7pm – free

Scotland, Spain, Croatia, China and Poland will dancing in this gala performance. Tickets are available from the Usher Hall in person at the Box Office – tel: 0131 228 1155 or online www.usherhall.co.uk with any remaining for sale at the door. £12 full price /£10 concession /£7 children up to the age of 18.

Saturday 22 July: STIRLING CASTLE Scotland, Spain, Croatia, China and Poland in their last performance together in the stunning location of the Queen’s Garden at Stirling Castle 1.30-3.45pm. Not to be missed! (Historic Scotland Admission is required £15/£12/£9)

The festival is organised by Dunedin Dancers in association with Edinburgh University New Scotland Country Dance Society (‘New Scotland’). Dunedin Dancers was formed in 1970 to reciprocate the experiences New Scotland had had to perform in other countries with the opportunity to perform in a festival in Edinburgh. The first biennial festival was held in 1971 and has continued since then hosting two-to-three groups each time – with performances around Edinburgh and surrounding areas.

The two Scottish groups come together to perform Scottish Country Dance, Highland and Scottish stepdance (hard shoe), to music played primarily on the fiddle, accordion and bagpipes. For more information about all our activities, including this festival, phone 0795 191 8366 or visit our websites: www.dunedindancers.org.uk / www.newscotland.org.uk

Varaždinski folklorni ansambl was founded in 1998 with the mission to protect, perform and present Croatian traditional culture, folk dances, songs, music and costume. It has a large membership that works in two sections – dancers and musicians – under the lead of the ensemble’s artistic director Pjerino Hrvaćanin. The programme of the group varies – consisting of dance performances, music concerts and folklore singing. Every year they organise and take part in a large number of events in their hometown of Varazdin, other parts of Croatia, and countries across Europe, participating at festivals, winning awards – such as the 2015 national review of Croatian folk dance ensembles and making friends! We met this group at Schwalenberg in 2016. www.vfa.hr

Balladors des Raiguer is a recently-formed group of very experienced and dedicated dancers from region of Marratxí in in the central north part of Mallorca, by the Tramuntana mountains, Spain. They aim to spread their culture through dance, music and traditional costume, including promoting the Catalonian language as a fundamental part of it. Their costumes are replicas of clothing from the 18th century until early 20th century. The dances performed by the group come from their local area, particularly four old Bolero dances from the school of the old dance masters of Marratxí. Whilst Balladors des Raiguer is a new group, they have already performed abroad and run their own festival ‘Terra de Fang’ on Mallorca. Several Dunedin members met this group at a folk festival in Spain in 2016. http://balladorsdesraiguer.org

Polish Song and Dance Ensemble, Ojczyzna, had existed in Edinburgh for over 30 years – led by artistic director, Stefan Boron. Under the same leader, it was set up again in May 2014 by the Polish Cultural Festival Association, as a part of the Polish Scottish Heritage Festival project, ‘Ceilidh with a Polish Twist’, as a pilot project to continue dancing in the spirit and tradition of the former Ojczyzna group. During the early years of the Dunedin Festival, Dunedin Dancers had many contacts with Ojczyzna, and we are glad to pick up the thread and renew our friendship! www.facebook.com/polishdanceedinburgh

Edinburgh Chinese Arts Association (ECAA) is a voluntary, not-for-profit, independent arts association group founded in 2013. All its members are music and dance lovers including both professionals and amateurs. Their purpose is to disseminate and display Chinese arts, enhance Edinburgh’s multi-ethnic, multi-cultural and artistic atmosphere, improve local Chinese artistic pursuits, foster and increase community engagement and cohesion through arts and culture. The ECAA has taken part in the Edinburgh Mela, Edinburgh Festival Carnival, Chinese New Year and many other local events during the last three years and successfully organised a charity show in late 2016. www.facebook.com/edinburghchineseartsassociation