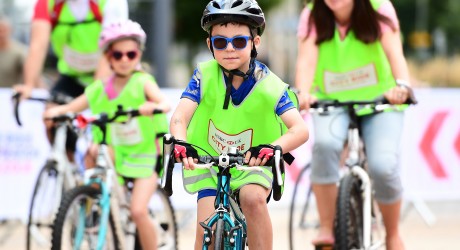 BRITISH Cycling and HSBC UK have revealed the route for the HSBC UK City Ride, taking place in Edinburgh on 3 September.

Taking place on the same day that the 2017 OVO Energy Tour of Britain departs the city, the HSBC UK City Ride course will allow participants to experience their city on two wheels, emulating some of the sport’s biggest names.

The course takes in a 4.5km closed road circuit through the Old Town and Southside of the city, taking in familiar landmarks such as Edinburgh Castle, the University of Edinburgh, the National Museum of Scotland, the National Library and the Royal Mile, and providing some great views of the city.

The route begins at the family focused event hub in the Meadows, and heads east along Melville Drive, turning left along Buccleuch Street, heading up George IV Bridge for the Royal Mile, with a brief detour up and down Chambers Street.

After a short climb up the High Street, cyclists will be rewarded for their efforts with a comfortable downhill section on Johnston Terrace, heading back to the Meadows via Lady Lawson Street and Melville Drive.

Scottish Olympic champion, Callum Skinner, said: “September 3 is set to be a fantastic day for cycling in Edinburgh, with both the HSBC UK City Ride taking place and the Tour of Britain departing the city.

“The HSBC UK City Ride route will allow participants to see and appreciate some of Edinburgh’s most iconic sights from a different perspective and this, coupled with the opportunity to watch some of the world’s best cyclists competing in the Tour, will make for a wonderful occasion and one which I hope will inspire thousands of people across the city.”

Alison McGregor, chief executive of HSBC in Scotland, said: “Taking part in the HSBC UK City Ride is a great way to enjoy cycling around Edinburgh without traffic, which is a rare opportunity.

“Edinburgh is a great city and the route will take in some of its epic architecture and landmarks including Edinburgh Castle and George IV Bridge, making it a great day out for families, those who want to get back on their bike after allowing it to collect dust at home, or for the more experienced cyclists who want to try something a bit more relaxed.”

Councillor Donald Wilson, Edinburgh’s Culture and Communities convener, said: “Edinburgh’s HSBC UK City Ride will allow fans to pedal hot on the tracks of some of the world’s top cyclists.

“Follow the route of the Tour of Britain Grand Depart, take in the stunning sights of the Capital and enjoy a fun day out winding through many of our city’s streets. The route will be closed to traffic throughout, ensuring a safe, family-friendly cycle for all abilities.

“The Council is delighted to support the HSBC UK City Ride – I’m sure citizens will join in their thousands and make the event a huge success.”

The event will be the eleventh of 14 free-to-attend City Ride events across the country in 2017, and is the first step towards HSBC UK and British Cycling’s ambition to get two million people on bikes by 2020, making cycling the UK’s most popular activity and sport of choice.

As well as exploring the city-centre route, the event will give young riders the opportunity to test their bike handling and pick up new skills on the HSBC UK Go-Ride course.

Run by British Cycling coaches, the area will feature obstacles and challenges for all levels of rider to tackle. There will be bikes and helmets available to borrow and you will be able to find out about all of the local cycling clubs and activities for children in the area. Younger participants will also be able to dress their bikes in the Kids’ Zone, which will house face-painting, a bib personalisation station and a caricature artist.

Entrants will be able to benefit from the presence of fully-qualified technicians who will be able to advise on any mechanical issues, while other activities such as a virtual reality cycling experience, street velodrome and the Sir Chris Hoy challenge – where participants can challenge Sir Chris’ Olympic gold-medal winning sprint time – will ensure a fantastic day for entrants of all ages.

The events are completely free and participants can either register their participation at www.letsride.co.uk or enter on the day.

Generic images of cyclists on the HSBC City Ride and various graphics of the Edinburgh route can be downloaded by going to: https://www.dropbox.com/sh/ggjeb3soitqjokz/AACn_EaD2fjRawvmHnhFoLeoa?dl=0