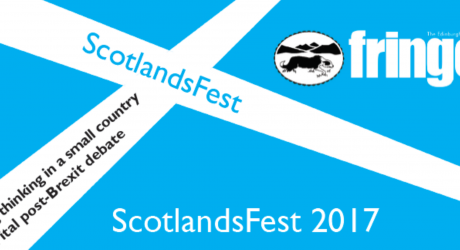 SCOTLANDSFEST 2017 gathers leading commentators, academics and journalists for a week-long series of talks, discussions and debates.

There will be vital, post-Brexit debate as well as poetry inspired by Scotland’s relationship with the Indian subcontinent from:

Full details of all the events, as well as tickets, can be found at http://www.luath.co.uk/scotlandsfest-2017.

In a swiftly-changing political landscape, what is the role of the arts in Scotland? Sandy Moffat and Alan Riach, authors of Arts and the Nation, in conversation with artist, Richard Demarco.

Scotland is preparing to take control of part of its welfare system for the first time and an universal basic income scheme is one approach on the table. But is it really workable? Annie Miller, author of A Basic Income Handbook, outlines the potential benefits for us all.

From Diana Gabaldon’s Outlander series to his own new historical romance, Flora McIvor, author and storyteller, Donald Smith, takes a look at the rising trend in Jacobite historical fiction, and its potential resonance for the present day.

Finding a voice and making it heard – the experience of three Scottish writers. Conversation and poems. With Anne Pia, Magi Gibson and Bashabi Fraser.

Magi Gibson packs political punch into many of the poems in her latest collection, Washing Hugh MacDiarmid’s Socks, while Greg Moodie takes the visual route to satiric political commentary in his regular contributions to The National. They discuss the medium and the message.

MSP, Neil Findlay, author of the forthcoming Socialism and Hope, in which he envisions a society transformed through a revitalised labour movement, in conversation with poet, Alistair Findlay, editor of Lenin’s Gramophone, an anthology of socialist poems.

Gerry Hassan and Russell Gunson, editors of Scotland, the UK and Brexit, debate the inevitability or otherwise of Brexit and ask what’s next for Scotland and the rest of the UK.

Leading historian, Owen Dudley Edwards, whose forthcoming book, Nations and Nationalism, looks to the past to inform visions of the future, discusses what might be on the horizon for Scotland.

Sharing their understanding of what it takes to write about place and people, in fact and fiction, three writers with very different experiences of home and belonging – Bashabi Fraser, Hugh McMillan and Anne Pia.

Go behind the public face of the city to encounter its wild and mysterious heart with Stuart McHardy and Donald Smith, authors of Calton Hill and Arthur’s Seat, books in the Journeys and Evocations series.

A timely, sharp-eyed review of the SNP’s first decade in power with Gerry Hassan and Simon Barrow, editors of A Nation Changed?.

Can we break free from Westminster and the Brexit bourroch? A guid keek at the way ahead for the nation with Stuart McHardy, author of the sparky polemic in Scots, The Wey Forrit.

Most of us know that the modern world is making us sick, but what can we do about it? With naturopath, Joanna Thomson, author of Live Well Eat Well Be Well, who advocates healthy living, mindfulness and clean eating as the antidote to the stresses of life.

Is a Brexit bypass possible? What can we learn from our Nordic neighbours? Lesley Riddoch, author of Blossom and McSmorgasbord, challenges you to rethink your views on Brexit and Independence.

MEDIA RELEASE issued by Luath Press. You too can share your stories (aka press or media releases), on this site. Email here for more information.