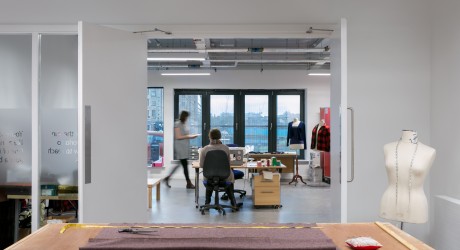 ON Saturday 16 September, from 10am to 5pm, visitors are invited to explore Rockvilla, the National Theatre of Scotland’s new engine room for Scottish theatre and resource for theatre-makers, which will be opening its doors, technical and rehearsal spaces to the public as part of Glasgow Doors Open Days festival.

Named Rockvilla in recognition of the industrial and social heritage of the area surrounding Speirs Wharf in Glasgow, the building is a hub for supporting and developing talent and a place where people of all ages and abilities can learn and create.

Rockvilla was officially opened in January 2017, and since then has accommodated rehearsals, events and workshops for a wide range of artists, theatre companies and community groups.

There is a bookable tour, talk and Rocket making workshop available throughout the Open Day, as well the chance to experience the building on a drop in basis including craft activities for children; self-guided tours of the front of the building and a range of videos and exhibits about National Theatre of Scotland theatre productions and projects.

Please see information below for bookable events, some of these are sold out but there will be a few places available on the day as well.

ROCKET MAKING FAMILY WORKSHOPS WITH ROCKETEER JOHN BONSOR at 11am and 2.30pm

Enjoy a family rocket making workshop with leading Rocket Man John Bonsor, with a chance to make and then fly your own rocket on the banks of the Forth and Clyde Canal. The National Theatre of Scotland’s family show, Rocket Post, by Lewis Hetherington, opens later in September, touring Scotland until 21 October 2017.

THE HISTORY OF ROCKVILLA AND THE LOCAL AREA at 2pm

Find out more about the history and heritage of the Rockvilla area and its unique position in North Glasgow, on the Forth and Clyde Canal, featuring  contributions on the building of Rockvilla – from Rory McCoy, from Hoskins Architects, Colin Clark (local heritage) and Simon Sharkey, associate director with the National Theatre of Scotland.

GUIDED TOURS OF THE BUILDING every hour from 10.30am

To find out about other open buildings and events across the city, visit the website at www.glasgowdoorsopendaysfestival.com

The National Theatre of Scotland is dedicated to playing the great stages, arts centres, village halls, schools and site-specific locations of Scotland, the UK and internationally.

As well as creating ground-breaking productions and working with the most talented theatre-makers, the National Theatre of Scotland produces significant community engagement projects, innovates digitally and works constantly to develop new talent.

Central to this is finding pioneering ways to reach current and new audiences, and to encourage people’s full participation in the company’s work.

With no performance building of its own, the company works with existing and new venues and companies to create and tour theatre of the highest quality.

Founded in 2006, the company, in its short life, has become a globally significant theatrical player, with an extensive repertoire of award-winning work. The National Theatre of Scotland is supported by the Scottish Government. nationaltheatrescotland.com

Doors Open Days is co-ordinated nationally by the Scottish Civic Trust. It runs throughout Scotland every September as part of European Heritage Days. For more information, see www.doorsopendays.org.uk.

MEDIA RELEASE issued by NTS. You too can share your stories (aka press or media releases), on this site. Email here for more information.