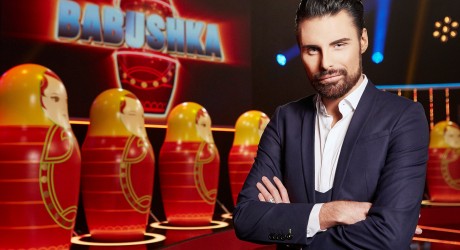 BABUSHKA, the high-stakes Armoza Formats game show made by STV Productions, is in the running for a coveted Rose d’Or award.

ITV Daytime commissioned STV Productions to make 20 episodes of the innovative show conceived by Armoza Formats – a key player in the international content market – in January 2017 and the series, hosted by Rylan Clark-Neal, transmitted from May 1 over four weeks, showing Monday to Friday at 5pm.

Babushka is one of 40 programmes from 13 different countries to be nominated in the prestigious Rose d’Or awards which recognise the very best in international television and online entertainment.

The winners – across ten categories – will be announced next week on 19 September in Berlin at the 56th annual Rose d’Or Awards ceremony, organised by the European Broadcasting Union (EBU).

Babushka involves pairs of contestants competing for a chance to win thousands of pounds by opening eight of ten giant Russian ‘babushka’ dolls. The players have to answer true or false questions to open each one; if they answer correctly and a smaller ‘babushka’ is revealed inside their doll, they start banking cash but if the doll is empty they lose everything and start again.

With winnings being staked at each stage and contestants’ knowledge and game strategies being compromised by sheer luck, the unique format makes for a game of thrills and an exciting experience for players and viewers alike.

STV Productions head of Entertainment, Gary Chippington, said: “We are thrilled that Babushka has been shortlisted for a Rose d’Or award. The nomination is a fantastic endorsement of this hugely innovative format.”

Avi Armoza, CEO of Armoza Formats, said: “We are delighted that Babushka was nominated for a prestigious Rose d’Or Award and that it has been recognised for its uniqueness and the thrill it brings, in which you never know what will happen next.

“It was a great privilege to have collaborated with STV Productions and ITV on the UK adaptation, and we are proud to share with them this achievement.”

Over 430 programmes from more than 160 broadcasters and production companies were submitted for this year’s Rose d ‘Or awards.

In addition to Babushka, the nominees in the Game Show category are: Bigheads – UK, So Pra Parodiar – Brazil, and The Wall (Face Au Mur) – France.

The company has a record of success across a range of genres, including drama, entertainment and factual, for a wide range of broadcasters. Ratings winner, Antiques Road Trip, has run for fourteen series on the BBC, along with a further six series of sister programme Celebrity Antiques Road Trip.

In entertainment, the company has produced five series of Catchphrase for ITV, and two series of Safeword for ITV2, as well as new reality format, Tour de Celeb, for Channel 5 and The Dressing Room for UKTV’s entertainment channel, W.

Other STV Productions documentaries include: Prison: First and Last 24 hours, with a second eight-part series on Sky1; Scotland and the Battle for Britain presented by Andrew Marr for BBC Two; The Lockerbie Bombing for the Smithsonian Channel and ITV; The 7/7 Bombing: Survivors’ Stories for ITV; Rollermania for BBC Scotland and BBC4; The Queen Mary: Greatest Ocean Liner, a documentary for BBC Scotland, BBC Four and Smithsonian Channel; andFire in the Night, a feature documentary to mark the 25th anniversary of the Piper Alpha disaster, which won a BAFTA Scotland Award for Best Single Documentary and the Audience Award at the Edinburgh International Film Festival. The latest STV documentary commission, for ITV’s autumn 2017 ‘Crime & Punishment’ series, is the film Ross Kemp In Jail – Inside Barlinnie.

STV Productions has a track record of producing quality returnable drama series, including Taggart and Rebus, with ambitions to build on this reputation. In the last five years, it has produced Fast Freddie and The Poison Tree, both for ITV. It currently has a number of script commissions from the BBC and ITV and in August, it secured a four-part thriller for BBC One, The Victim, which will be filmed in Scotland early next year.

Established in 2005, Armoza Formats has become a key player in the international content market, rapidly growing to be one of the top independent creators and distributors of global content.

Taking the best of Israeli and international creative talent, Armoza Formats spearheads the emergence of compelling content in today’s dynamic market. Our mission is to meet the challenges of the fast-changing media industry with creative broadcast solutions.

With over 90 formats in our catalogue and productions across the globe, Armoza Formats has a proven track record of success across all genres – from spectacular prime time entertainment show I Can Do That!, now licensed in over 20 countries, to hit game show Still Standing with 5,000 episodes globally, and docu-reality format Connected, on air in over ten territories.