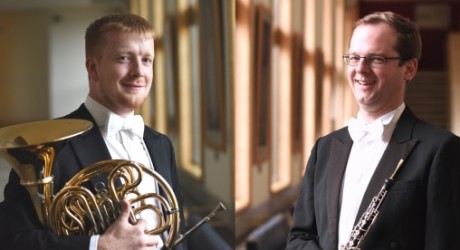 Andrew, originally from Dunoon in Argyll & Bute, first picked up a brass instrument at the age of ten.

During his school years Andrew performed with the West of Scotland Schools Orchestra, and benefitted from the RSNO’s side-by-side scheme, playing alongside professional members of the orchestra.

He attended the Royal Scottish Academy of Music and Drama (RSAMD) Junior Department in Glasgow under the tuition of former RSNO principal Horn, Maurice Temple, and then went on to study his Undergraduate and Masters Degrees in Performance at the RSAMD/RCS, receiving lessons from Hugh Potts, David Flack and the current head of Brass (a previous third horn of the RSNO), John Logan.

During this time, he made regular guest appearances with the RSNO and the BBC Scottish Symphony Orchestra. Peter was a member of the Jeunesses Musicales World Orchestra, which toured extensively in Europe and North America.

RSNO associate principal Horn, Andrew McLean, said: “I am delighted to become a full-time member of the Royal Scottish National Orchestra. I have been attending RSNO concerts since I started playing the horn – I am now thrilled to be a part of, not only a great section, but a fantastic orchestra.”

Former RSNO associate principal Horn and now RCS head of Brass, John Logan, added: “I taught Andrew for the first two years of his time at the RCS.

“We first met while I was still with the RSNO, when we performed side-by-side with the West of Scotland Schools Orchestra.

“He was always regarded as a hard-working individual, who was prevalent playing principal parts in the orchestra and also with the RCS’ top brass ensemble. I’m so happy that he is now in the job that I cherished for 17 years in the RSNO and wish him every success.”

RSNO associate principal Oboe, Peter Dykes, said:  “I’m thrilled to have come full circle and joined the orchestra that I not only spent my formative years listening to, but also had my first professional orchestral experience with, conducted by Alexander Lazarev in 1999. Also, after spending 17 years living overseas, it’s brilliant to be back in Glasgow, my favourite city!”

RSNO music director, Peter Oundjian, also said: “Following thorough audition and trial processes for each, it became clear that Andrew and Peter were the individuals best fitted to join our ensemble. They are phenomenal musicians who have benefitted from expert tutelage from previous RSNO musicians. I very much look forward to working with them over the coming season.”

MEDIA RELEASE issued by the RSNO. You too can share your stories (aka press or media releases), on this site. Email here for more information.