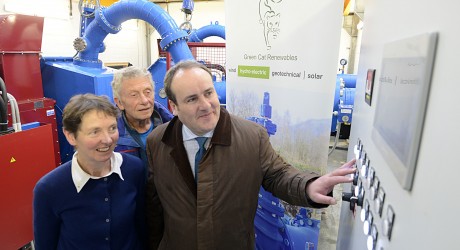 NEVIS Range Hydro Company, the sister business to Nevis Range Mountain Experience in Lochaber, today (23/10/17) celebrated the completion of a new hydroelectric scheme, that has now powered the Nevis Range base station and gondola since December 2016, with a ceremony performed by Paul Wheelhouse MSP, the Scottish Government’s Minister for Business, Innovation and Energy.

Scottish Government Minister for business, innovation and energy, Paul Wheelhouse said: “I warmly congratulate the Nevis Range Hydro Company for the realisation of such a forward-thinking and ambitious project and the hard work that has clearly underpinned the delivery of the project.

“I’m sure that constructing a hydro-electric scheme so close to Ben Nevis itself, in a National Scenic Area and close to the summit of one of highest peaks in the British Isles was not without its challenges – but the creation of a sustainable and affordable, green energy source should hopefully prove to be just reward for those endeavours.

“This £4 million investment will ensure a financially and environmentally sustainable power supply to support vital local economic activity at Aonach Mor, including skiing and mountain biking.

“The Scottish Government is committed to realising its vision for a low carbon future and strongly supports investment in new hydro schemes. The 1.1MW Nevis Range hydroelectric scheme is a fine example of sustainable, low carbon investment, and I am honoured to be here to officially open it.”

The new hydroelectric scheme, situated at the Allt choille Rais – known to skiers and boarders as the Braveheart Burn in the ‘Back Corrie’ of Aonach Mor, has an electrical output range of 40kW to 1.1MWh from two 550kW Pelton turbines. The scheme is projected to generate 3,700MWh per annum, equivalent to the annual electricity consumption of over 1,000 households.

The power generated from the turbines is transferred via an 11kV private HV cable to the Nevis Range Gondola Station. The power is then used onsite with any excess being exported to the National Grid.

Peter MacFarlane, managing director of Nevis Range, said: “The idea of building a hydro scheme was an attractive one to Nevis Range.

“Not only did we want to produce green power with the option to export any excess to the National Grid, reduce carbon emissions and help mitigate climate change, we were also looking for a way to benefit from the periods of wet and windy weather when our visitor attraction and ski area struggles to generate income from its normal business.”

The hydro project was first conceived in September 2012 after the then Nevis Range chair, Jim Gunn, looked at various options and staff from Greencat Renewables walked over the ground at Allt choille Rais.

A separate company, Nevis Range Hydro Company, was then formed to raise the investment for the development. After a number of lengthy negotiations regarding the leases, planning permission, grid connections; and the raising of a 3.2m loan, the construction of the high voltage cable route started in late 2015 and the pipeline in spring 2016.

Marian Austin, a director of Nevis Range Hydro Company and responsible for liaison between the various partners involved in the build, said: “This hydro scheme was a hugely challenging project due to the remoteness of the intake, the steepness of the terrain and its location within the Ben Nevis Special Area of Conservation (SAC) and the National Scenic Area (NSA).

“The contractors, George Leslie Ltd, had to bring in specialist equipment such as a walking digger from Hitrak in Beauly and manpower from GeoRope in Ballachulish. As the development of a road to the intake was ruled out, materials such as pipes, concrete and machinery had to be flown to the site by helicopter.”

The new hydro scheme started generating in December 2016, but it was too late in the year to finish the reinstatement of the pipeline and the access roads, so this work was carried out over summer of 2017 and has only recently been completed.

Peter MacFarlane added: “We have already seen the benefits of cheaper electricity over the summer. The snowmelt from the Back Corrie in the spring also meant our hydro scheme continued to generate small amounts of electricity when other schemes were struggling.”

Marian Austin also commented: “The turbines have generated over 2.5 million kWh to date. This is good news for Nevis Hydro Company as we borrowed £3.2m from Close Brothers Asset Finance and need to make a start on paying it back.”

Green Cat Renewables, and sister company, Prelec, were delighted to partner and invest in the Nevis Range project. Green Cat and Prelec provided technical expertise on the hydro scheme, and electrical integration respectively.

Director, Gavin Catto, commented: “This has been a fantastic project to be involved with. It has been one of the most complex renewable energy projects both technically and commercially built in recent years, and we worked well with Nevis Range, who came to us with a clear vision of what they wanted to achieve.

“I am very pleased that we managed to work together to deliver this project that will, I am sure, help ensure a long term sustainable future for the Nevis Range ski and outdoor centre.”

For images of the launch ceremony, go to: https://www.dropbox.com/sh/rsjrff2njnraor7/AAA_tCNtsmk3EEtFop1c-ihda?dl=0

The new hydroelectric scheme is located on the Allt Chroille-Rais, west of the Nevis Range Mountain Experience. Water is abstracted from the burn via an intake structure and transported down to the powerhouse through 1.5km of pressurised pipe. The total head is 318m that gives a working pressure of just under 32bar. The pressurised water drives two 550kW Pelton turbines, before returning to the burn. The total electrical output is 1,100kW. The power generated is transferred via an 11kV private HV cable to the Nevis Range Gondola Station. The power is then used onsite with any excess being exported to the National Grid. The scheme is projected to generate 3,700MWh each year which is equivalent the annual electricity consumption of over 1,000 households.

Green Cat Renewables is a renewable energy consultancy founded in December 2004 by Gavin Catto. The company has offices across Scotland in Biggar, Edinburgh, Livingston and Inverurie, employing 50+ technical staff, and opened an office in Calgary, Canada, earlier this year.

The company was established with an aim of driving down the costs associated with the development of renewables projects and making renewables accessible beyond the large developers and utilities.

Green Cat has two sister companies, Green Cat Contracting and Prelec, both based in Scotland and providing services for renewable energy projects.