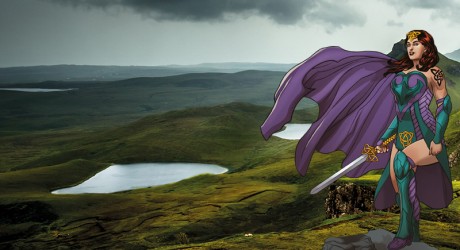 The festival runs from November 17-26 in Edinburgh and will host former First Minister, Alex Salmond, in conversation with Professor Sir Tom Devine on November 25th 2017 at 7.30pm in the City of Edinburgh Methodist Church Halls on Nicolson Square.

“One stood in the very eye of a political storm and the other has been responsible for shaping a new view of our national story. Think of it as a bit like watching Godzilla face Kong. Only noiser.”

The festival has already drawn praise for its vibrant and diverse line-up, including:

* The Flyting: a celebration of the Scots language (includes swearing, be aware!);

* Runaway slaves in Britain: an unique collaboration reflecting on a lesser known aspect of black history;

* Gaming history: explore the reality of the historic people behind the pixels in your computer games. Could you hack it as a real pirate /Viking/Egyptian?;

* Come dine with kant: Dine in one of Edinburgh’s finest restaurants according to the rules laid down by the great philosopher;

* An afternoon with Elsie Inglis: on the centenary of her death, a chance to learn more about this truly great Scottish woman;

* Trace your family tree with Dr Bruce Durie: dig deep to find your family roots with a man who can find that hard-to-track errant ancestor;

* Tom Devine in conversation with Kevin McKenna – Devine in the spotlight with McKenna;

* The Templars with Dan Jones: the knights who went into dubious legend;

* The Medici: Mary Hollingsworth and the reality of the family who built banking; and

The full programme and ticket details are available online at www.historyfest.co.uk.

This year, Previously… Introduces ‘Caledonia’ – who features on the cover of the programme. A true Scottish superhero/warrior goddess, she embodies what it is to be Scottish. Created by Gary Erskine, internationally-renowned Scottish comic-book artist who has worked on projects for nearly every major comics publisher. including DC Comics, Dark Horse Comics and Marvel.

His work also appears in computer games and film.

Susan Morrison is the longest-serving MC at the Stand Club, she presents BBC Radio Scotland’s history magazine programme, ‘Time Travels, and is also a columnist.

She is obsessed with history, particularly ships. Do not ask her about the Titanic. No, don’t.

Previously… Scotland’s History Festival has been running since 2012 (with a year off in 2016).

MEDIA RELEASE issued by Previously… Scotland’s History Festival. You too can share your stories (aka press or media releases), on this site. Email here for more information.