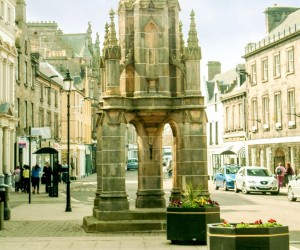 FORRES High Street has today been crowned the most beautiful high street in Scotland.

It took the top spot in the competition run by Scotland’s Towns Partnership, Keep Scotland Beautiful and the Sunday Herald, receiving 23 per cent of the total votes cast.

Meanwhile, Elgin also featured in the top ten, coming in eighth place with six per cent of the votes.

Forres was declared the winner by Kevin Stewart MSP, at the Scotland’s Towns conference in Paisley earlier today.

The Forres entry boasted of the colourful floral displays, distinctive architecture and the people of the town as being great assets.

“We have it all – green spaces, infrastructure, heritage, architecture – all kept to a high standard of care and cleanliness, reflecting the pride of place cherished by our people. We love where we live.”

Leader of Moray Council, Cllr George Alexander, said the accolades were testament to the hard work put in by the respective communities, including community groups, volunteers, shopkeepers and Moray Council.

“I’m absolutely delighted to see that two Moray towns have featured in the top ten most beautiful high streets in the country.

“As a Forres councillor, I’m ecstatic that Forres won; it’s a tribute to the efforts of the volunteers involved and particularly those who are responsible for the fantastic floral displays on the high street.

“Thanks also to the shopkeepers on both high streets who create and maintain attractive window displays which we all enjoy.”