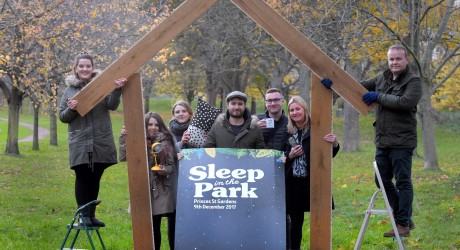 FIVE of Edinburgh and Glasgow’s creative agencies have pledged to raise over £15,000 to help end homelessness in Scotland as part of Social Bite’s ‘Sleep in the Park’, in the capital on the 9th of December.

Organised by Social Bite co-founder, Josh Littlejohn MBE, Sleep in the Park will see 9,000 people take to Edinburgh’s Princes Street Gardens to spend a night out in the cold. By funding social projects, such as The Social Bite Academy, the charitable organisation aims to provide housing for Scotland’s 11,000 homeless, within the next five years.

Creative agencies, Represent, The Leith Agency, Taste Design, Whitespace and Stripe, will join forces and brave the elements to raise funds that will go towards creating homes for thousands of people around Scotland.

Gearing up for the challenge, Represent managing director, Judith O’Leary, says: “Although this is an one-off challenge for us, for many across Scotland, sleeping rough is a nightly reality. That’s why we are incredibly proud to be supporting Social Bite village as an initiative that’s really making a difference when it comes to putting an end to homelessness across Scotland.”

Funds raised from Sleep in the Park will be invested into housing solutions, a nationwide jobs program, addiction rehabilitation facilities, and outreach and engagement with the homeless community.

Speaking of the initiative, Josh said: “Sleep in the Park is about bringing the people of Scotland together for one night to support a single cause, and it’s great to see all of these companies coming together for the greater good.

“I’m so grateful for the support and extend a huge thank you to everyone who is participating. There is still time to sign up, and I would urge other businesses and individuals who would like to take part to join our movement.”

Liam Gallagher, Amy Macdonald, Deacon Blue and Frightened Rabbit will be providing musical entertainment and participants who raise over £5,000 will also receive a bedtime story read to them by writer, actor and comedian, John Clease.

Sleep in the Park

Sleep in the Park is a mass sleep-out taking place on the 9th of December 2017 in Edinburgh’s Princes St Gardens.

Organised by Josh Littlejohn, co-founder of Social Bite, 9,000 will take part in the challenge with the hopes of raising £4m to end homelessness in Scotland and beyond.

Represent, previously O’Leary PR, was launched in 2002 by founder Judith O’Leary.  In 2017, the agency rebranded to Represent, moved to offices in Calton Road, Edinburgh, and launched a digital division.

The eleven-strong team work across a number of clients in sectors spanning food and drink, agriculture, professional services, events, tourism, renewables and property.

MEDIA RELEASE issued by Represent. You too can share your stories (aka press or media releases), on this site. Email here for more information.