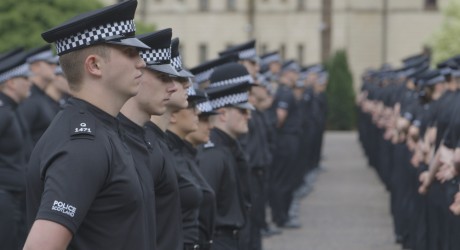 A LANDMARK documentary series on the history of the Scottish police – made by STV Productions for BBC Scotland – starts on BBC One this Monday, 27 November.

The Force: The Story of Scotland’s Police documents the service from its origins 400 years ago, when James VI of Scotland decreed every parish should have two constables, through to the 1800 establishment of the Glasgow City Police, recognised as the UK’s first formal force, right up to today’s modern public services organisation.

Three episodes will shine a spotlight on the service which has provided Scotland with centuries of law enforcement to keep the country’s peace and make our communities safer. They look at policing practices past and present and meet the men and women behind the uniform, telling their stories and highlighting how their roles have changed through the years.

With captivating archive material and candid testimony from retired officers, as well as contemporary footage of the police in action, the series provides a fascinating insight into the development of policing in Scotland and how far investigation-handling and crime solving techniques have advanced.

The three programmes in The Force: The Story of Scotland’s Police are:

* The Beat Patrol focuses on the lowest ranking office, that of constable. Almost 80 per cent of the 17,000 officers in today’s Scottish police force hold the rank; viewers will hear tales of life on the beat from young probationers and retired officers, including a former Detective Chief Superintendent, to learn about their experiences and find out what it’s really like to tread Scottish streets wearing a police uniform.

* The Detectives examines the evolution of police detective work, from its early beginnings in the 19th century to the landmark cases of the 21st century. Officers recount their often moving memories of infamous, harrowing cases and discuss the impact of technological advances, particularly in forensic science and DNA.

* Law and Order looks at policing through times of social change – from the mob rule of the 18th century through to the national unrest during the major industrial actions of the 1984-85 miners’ strike and the violence of the 31st G8 summit protests at Gleneagles in 2005.

Michael McAvoy, head of Documentaries at STV Productions, said: “The Force: The Story of Scotland’s Police reveals tales of personal sacrifice, groundbreaking forensic science, blatant sexism, tenacious detective work, horrifying crimes and outstanding bravery. However, we also had excellent access to today’s police force so the series gives viewers a unique perspective on the challenges that our modern police face every day.

“Television viewers in Scotland have been entertained over the years by fictional police in dramas like Taggart and Rebus but, with The Force, they will, at last, get to see the reality of how Scotland has been policed.  I’m sure they will see that the reality is even more captivating than the fiction.”

David Harron, commissioning executive at BBC Scotland, said: “This is a fascinating series which offers a real insight into the evolution of policing in Scotland over the years, and also traces the stories behind some of the country’s most notorious cases. With hugely powerful testimony from former officers it reveals how attitudes as well as techniques have changed and stands as a compelling piece of social history.”

Episode one of The Force: The Story of Scotland’s Police airs on BBC One at 21.00 on Monday 27 November.

In entertainment, the company has produced five series of Catchphrase for ITV and two series of Safeword  for ITV2, as well as reality format Tour de Celeb for Channel 5 and The Dressing Room for UKTV’s entertainment channel W.

STV Productions has a track record of producing quality returnable drama series including Taggart and Rebus with ambitions to build on this reputation. In the last five years, it has produced Fast Freddie and The Poison Tree, both for ITV, and the business recently secured its first BBC drama commission – four-part thriller, The Victim, for BBC One, which is now in pre-production.