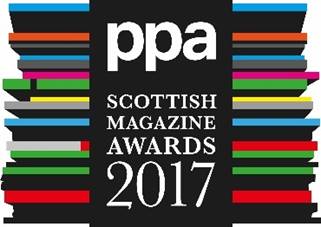 More than 250 guests joined in the celebrations at the gala dinner and award ceremony hosted by broadcasting treasure, Judith Ralston, on Thursday 23 November at the EICC, Edinburgh.

For the first time, the award for Cover of the Year was decided 100 per cent by public vote. More than 10,000 votes came in for the shortlist of 18 covers. The winner was revealed as The Big Issue’s satirical take on John Carpenter’s They Live, featuring Donald Trump.

PPA Scotland business manager, Laura Dunlop, said: “The PPA Scottish Magazine Awards are a window onto a vibrant and dynamic industry. The talent on show from all the winners and shortlisted entries is incredible – and we are delighted to be able to celebrate with so many talented people.

“We were particularly pleased to see so many readers vote for their favourite magazine cover. It shows the important place that magazines continue to play in people’s lives.”

SCOTTISH MAGAZINE OF THE YEAR

Sally Hampton, editor-in-chief, My Weekly / The Scots Magazine / No 1 Magazine

PPA is the association for magazine publishers and providers of consumer, customer and business media in the UK. PPA’s role is to promote, protect and advance the interests of the industry and has been doing so for 100 years.

PPA Scotland represents member organisations from the Scottish magazine publishing industry and launched the Scottish Magazine Awards in 2003. The current chair of PPA Scotland is Paul McNamee, editor of The Big Issue.