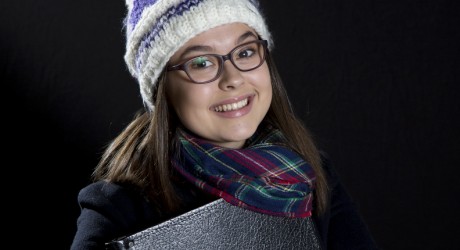 THE Royal Scottish National Orchestra (RSNO) will be joined by star of the CBBC comedy series, Millie Inbetween, for its annual Christmas Concerts this season, coming to Perth, Dundee, Edinburgh and Glasgow.

BAFTA Nominated Millie Innes, who recently celebrated her 17th birthday, rose to fame in 2010 performing alongside fellow Scottish actor, David Tennant, as his on-screen daughter in BBC One drama Single Father and with Star Trek and Harry Potter star Jason Isaacs in the Edinburgh-based BBC series Case Histories. Since 2014, Millie has starred in her own sitcom series Millie Inbetween which airs on the BBC’s children’s television channel CBBC.

The RSNO Christmas Concerts (sponsored by the RSNO’s Transport Partner ScotRail) features the screening of Raymond Briggs’ classic animation, The Snowman, which marks its 35th anniversary of its first broadcast on Channel 4 this year. Millie Innes will narrate the story to the film with live symphonic accompaniment, led by conductor Christopher Bell.

The RSNO Christmas Concert is also filled with seasonal favourites, carols and the chance for the audience to join in with the orchestra and chorus. The Herald’s music critic, Michael Tumelty, gave last year’s Christmas Concert five stars out of five and described it as “…one of the best of such shows I have devoured with delight…”

RSNO Christmas Concert narrator, Millie Innes: “I’m so excited to be working with the RSNO and it’s a great honour to be involved in this Christmas classic. The Snowman is a such a lovely story and something we can all enjoy as a family. I also look forward to collaborating with conductor, Christopher Bell, who, I’m told, knows how to throw a great Christmas party!”

The RSNO and its assistant conductor, Holly Mathieson, are accompanied by soprano Soraya Mafi for its Viennese Gala, which visits the Buccleuch Centre, Langholm on Friday 5 January (7.30pm), the Carnegie Hall, Dunfermline on Saturday 6 January (7.30pm), the Eden Court Theatre, Inverness (7.30pm) on Wednesday 10 January and the Albert Halls, Stirling on Thursday 11 January (7.30pm).

To book tickets or for more information visit www.rsno.org.uk.