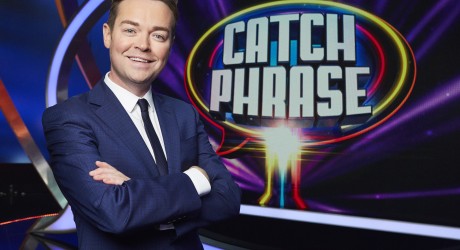 ITV has commissioned STV Productions to make a sixth series of the iconic game show Catchphrase.

With a format which has proved a real hit with viewers, the show involves contestants guessing a catchphrase through a series of animated clues to win money for each they name correctly in the first rounds – and earn even more if they solve the bonus catchphrase. The contestant winning the highest amount of cash then advances to the super catchphrase which offers the chance to bag up to £50,000 – plus a holiday.

In the celebrity editions of Catchphrase, the famous faces compete to win donations of up to £50,000 for their chosen charity.

Popular presenter, Stephen Mulhern – joined by animated sidekick, Mr Chips – will once again host the latest series and invite players to ‘say what they see’.

Stephen Mulhern said: “I’m really excited to be bringing Catchphrase back for another series. Filming it is always great fun and full of surprises and some of the guesses that contestants come up with turn out to be comedy gold so I’m sure viewers are in for some more great entertainment.”

Gary Chippington, head of Entertainment at STV Productions, said: “We’re absolutely delighted to be making more new episodes of Catchphrase. People watch in their millions because it’s the ultimate play-along show and we’ve got some great new catchphrases lined up in the new series to keep everyone ‘pressing and guessing’ at home.”

In entertainment, the company has produced five series of Catchphrase for ITV and two series of Safeword for ITV2, as well as reality format Tour de Celeb for Channel 5 and The Dressing Room for UKTV’s entertainment channel W.

STV Productions has a track record of producing quality returnable drama series including Taggart and Rebus with ambitions to build on this reputation. In the last five years it has produced Fast Freddie and The Poison Tree, both for ITV, and the business recently secured its first BBC drama commission – four part thriller The Victim for BBC One, which is now in pre-production.