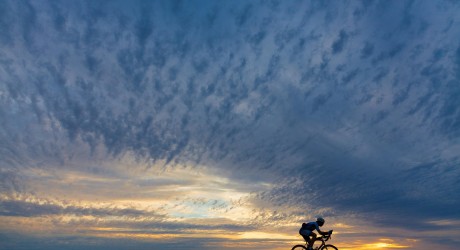 KITE-surfing across the Greenlandic ice cap, paddling through the Amazon in a self-made dugout canoe and various self-powered journeys around the world form some of the intriguing stories to be discovered at this year’s Edinburgh Mountain Film Festival, which is now in its 15th year.

Running from Saturday 3 to Sunday 4 February 2018, the popular mountain festival combines some of the best mountain and adventure films with powerful presentations from some of the world’s top adventurers.

Home talent is represented with an eagerly-anticipated presentation by Mark Beaumont, who recently smashed the world record for cycling around the globe.

Taking more than four years longer to circumnavigate the globe is Sarah Outen MBE, whose ‘London2London: Via the World’ expedition saw her loop the planet using a rowing boat, bike and kayak – a journey of some 25,000 miles that took four-and-a-half years.

Meanwhile, sticking close to its roots within the walking, climbing and mountaineering community, the festival welcomes climbing supremo, Pete Whittaker, and American mountaineer, Kelly Cordes – known for his bold ascents in Patagonia (and, legend has it, also for making the ‘best’ margaritas in Colorado!).

The festival will also screen almost 20 adventure films, covering epic journeys by bike, kayak canoe and kite-assisted skis, as well as documenting scary climbs, swimming with orcas, epic mountain biking and sketchy ski descents down some of the steepest mountain faces in Scotland.

The two-day festival is being staged, as always, at George Square Lecture Theatre in Edinburgh. Tickets for the popular festival start at £8 and are on sale now at https://emff.co.uk/  with the organisers reporting that tickets are already selling fast.

Excited by the huge variety of adventures being highlighted by the event, festival director, Stevie Christie, said: “The standard of films being submitted is so high that we’ve had to leave out some wonderful films.

“But the films that have made the final selection is fantastic and I know our audience will be thrilled and inspired by them.Our speakers will then elevate the festival to a new level.”

The festival, staged in association with Tiso, Mountain Equipment, Alien Rock and Wilderness Scotland, expects big numbers from the climbing, snowsports, kayaking, adventure sports, outdoor photography and filmmaking communities; as well as those who love the outdoors, travel and mountain adventure, from all over the UK to attend the event.

For full details of the festival and how to buy tickets go to: https://emff.co.uk/

For information on the 15th Edinburgh Mountain Film Festival, for images and to arrange interviews with festival director, Stevie Christie, any of the guest speakers or filmmakers; or to arrange private viewings of selected films, please contact:

Tickets cost from £8 – £14 and are available now from https://emff.co.uk/ or on the door, subject to availability. Some sessions will sell out in advance.

The festival aims to promote mountain culture and provide a platform for adventure filmmakers to showcase their work. In short, to entertain, enlighten and inspire. It also acts as a social gathering for Scotland’s vibrant outdoor scene. Finally, it raises funds for Mountain Rescue and the John Muir Trust.

The festival features lectures by leading mountaineers, adventurers and explorers, many short films and various exhibitions. The guest speakers are as follows:

The major sponsors of the Edinburgh Mountain Film Festival 2018 are: