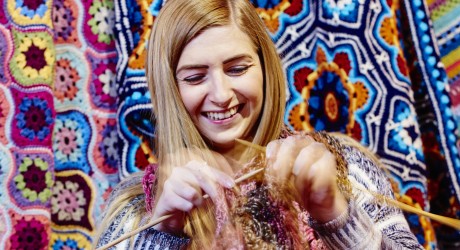 SCOTTISH knitters and crocheters are being asked to take part in a 2018 knitting project, to create a 13ft commemorative poppy to mark the centenary of the end of the First World War.

At the sessions, being led by knitting fanatics, Grans on the Make, volunteers will each knit or crochet a four-inch square section which will form part of the final poppy, which will be pieced together during 2018 and revealed at The Creative Craft Show, Birmingham in November.

When complete the poppy will be made up of 1,568 sections, representing the number of days of the war. Participants can also provide a short story, memory or name to be displayed on the stand and dedicated to those lost in the First World War.

Volunteer knitters are also asked to bring along knitting needles and red, black or green wool.

Jodie Firmin, ICHF show organiser, said: “This is a lovely opportunity for Scottish knitters and crocheters to use their skills for a lovely project and be part of a special commemorative creation to mark 100 years since the First World War. People with all knitting abilities are welcome to have a go and be part of this national centenary feature which will be created by crafters across the UK at our shows in Manchester, Exeter and London and Birmingham.”

The Scottish Creative Craft Show is taking place alongside The Scottish Quilting Show at the SEC from 8 – 11 March. More than 100 top craft exhibitors will showcase everything needed to stock up for those crafty projects. There will also be a host of experts on hand to give advice and share top tips as well as a programme of quick and easy workshops and talks.

The final poppy piece will be suspended on drop wires and the stand dressed with poppies, rintintins and stories and memories of family and friends pinned to a Memory Wall.

There will also be a Contributors Wall – featuring the names of each contributor at each show.

Follow on The Creative Craft Show and The Scottish Quilting Show

Both The Creative Craft Show and The Scottish Quilting Show are organised by ICHF Events, a leader in consumer craft shows www.ichfevents.co.uk