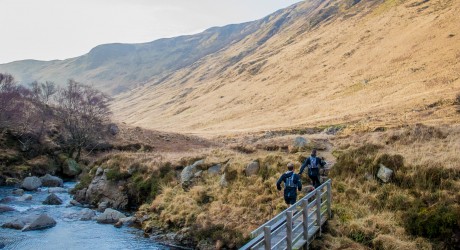 ON 14 and 15 April 2018, Race Race Adventure Sports, one of the UK’s favourite adventure challenge event organisers, 50 per cent of whose annual events are staged in Scotland, will add The Ultra Tour of Arran (UTA), a two-day, fully-supported and waymarked, off-road adventure run, packing a 100km Ultra distance route and an overall vertical gain of 10,679 feet, to their 2018 event programme.

They say that the mythical Isle of Arran is ‘Scotland in miniature’ and the fantastically varied and distinct 50km trail running routes on the two days of adventure highlight this perfectly. The high mountains, the deep glens, the enchanting forests and the stunning coastal scenery all feature. From dense forests and coastal beaches in the south on day one to the iconic castles and dramatic mountains in the north on day two, The Ultra Trail of Arran delights at every turn.

When signing up runners will have the option to take on the challenge of day one only or the full two-day 100km Ultra distance. Day one (between four and eight hours of running) is characterised by quiet paths, forest trails, some boardwalk sections, some tarmac sections through villages and a lot of forest dirt roads.

Day two (between six and 12 hours of running) is virtually all off-road with some serious mountain sections (there might even be snow on the hilltops), where the going is decidedly rough underfoot. There will be several scheduled pit stops interspersed on the route each day, for a quick rest and a refuel.

The UTA is suited to a range of athletes from elite to amateur sporting enthusiasts with a high level of fitness. It is an achievable step up from a marathon into ultra-running territory, for both solos and pairs, who have prepared well and put in the training miles.

As with all of their events, to ensure runners, their families and friends have the best weekend possible Rat Race will operate from a central Basecamp, for UTA located in Brodick, just one kilometre from the island’s ferry terminal. This hub will have all the quality trappings of a Rat Race event – good food and drink, great amenities, friendly and hospitable staff and Saturday night entertainment. A complimentary shuttle service from the ferry, together with camping, full-serviced glamping; and limited paid parking options will also be available.

Jim Mee, MD of Rat Race Adventure Sports, said: “At Rat Race, we do events differently which makes them all the more appealing. And for The Ultra Tour of Arran, we love the notion of setting sail to a stunning location, ‘over the water’, where the myths, legends and island folklore fused with the rugged terrain will make runners feel that they are a million miles away, yet it is a mere 55 minutes from the mainland.

“We know everyone will love Arran, both Rat Racers and their clan support; and it’s not just for the excellent running we have planned. The island itself has a lot to offer with its own whisky distillery, brewery, craft gin, artisan cheese, aromatics, quality local food and drink and that very special west coast hospitality. The Island’s attractions will provide a magnificent long weekend for the family and friends who sign up for the Rat Race experience. We will also be helping supporters by pointing out the best safe and accessible spectator locations on the route.”

Rat Race is partnered with Children With Cancer UK (http://www.childrenwithcancer.org.uk), a leading national children’s charity dedicated to the fight against childhood cancer, in a pledge to fight the UK’s biggest child killer.

Rat Racers have raised over £1,000,000, across all Rat Race events, since the campaign began in 2015. If runners take part in the Ultra Tour of Arran 2018 and raise £750 through Virgin Money Giving for Children with Cancer UK before race day, Rat Race will return their entry fee. Go to: http://ratrace.com/uta/run-for-charity/

All runners looking to tame the challenge of The Ultra Tour of Arran should head to the website for more information and to sign up: http://ratrace.com/uta/

For a video preview of The Ultra Tour of Arran, go to: https://www.youtube.com/watch?v=tZp7wPenGWA

In 2018 Rat Race Urban Adventure Sports, who were forged on the streets of Edinburgh in 2004 with the staging of their first event, The Edinburgh Rat Race, will again showcase Scotland as a world-class adventure destination with five achievable multi-sport and endurance challenges on foot, bike and kayak.

These epic journeys and unbeatable adventures, full of camaraderie, fun and good humour, utilise the rugged and varied terrain of the country’s stunning landscapes and historic, iconic and evocative landmarks; urban and wilderness playgrounds of the highest quality.

Legend tells of a cult running event deep in the Scottish Borders whose distance is a closely guarded secret, only beknownst to the Laird, his Ghillies and anyone with a GPS watch. The route takes runners across rivers, through forests and over a mountain or two in the pitch dark on a chilly March night. The infamous Mighty Beerstalker Party follows late into the night.

This is City to Summit, an iconic journey between the historic heart of Scotland’s capital city, Edinburgh, and the summit of Britain’s highest peak, Ben Nevis. With a finish line set in spectacular Fort William, you will have 20 hours to tame this brute. It is no small undertaking and those who do reach the end will have achieved something truly remarkable.

Rat Race’s original adventure race returns to the wild hills of Scotland. Join 1,000 #RatRacers as they run, bike and kayak over 105 miles following the Great Glen from East to West, through one of the most famous mountain landscapes in the world. Awe inspiring views and a stunningly epic course await you in the Scottish Highlands.

The Second edition of the 34.2 mile ultra distance tour of the Scottish capital; a tough, fully waymarked, mixed terrain route of tarmac and off-road trail running, with 3000 feet of ascent and descent. From the Braveheart charge down the Royal Mile to the finish at Murrayfield Stadium; with the occasional sojourn totally off road to enjoy the hill top views of the Pentland Hills to the coastal waters and harbours of Newhaven and Leith in the east.

For images, interviews, further information or to arrange a route recce, contact:

Rat Race Adventure Sports (http://ratrace.com/) is a successful Scottish registered company, now based in York, yet with roots still firmly set in the City of Edinburgh. The company’s first ever event, The Edinburgh Rat Race, was staged in the city in 2004. It brought adventure racing into an urban environment and gave spectators a fantastic and thrilling event to watch. The company went on to organise a Rat Race Urban Adventure Series of at least nine Rat Races in the UK and Ireland.

Rat Race Adventure Sports now offers the largest selection of mass participation, wilderness adventure challenges in Britain, together with a branded range of its own sporting apparel and an online clothing and equipment store.

Their event programme has always been focused on Scotland – urban and wilderness playgrounds of the highest quality. In 2017 Rat Race brought a traditionally wilderness discipline, the ultra run, into an urban environment, making it truly accessible to both runners and spectators.