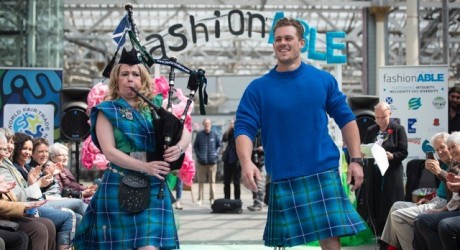 TOP Scottish female piper – and piper to the Lord Provost of Edinburgh – Lou Marshall is taking her pre-eminent piping skills and love of the new World Fair Trade Tartan on tour to London and New York, starting out from Waverley Station, today (8.3.18) on International Women’s Day 2018, today.

A leading piper for over 30 years, originally from Annan in Dumfries, Lou Marshall has formally been invited to star as the guest piper at the WOW Woman of the World Festival this week, and is preparing to fly out, very soon, to New York to take part in the Tartan Day Parade NYC this April, for the very first time with her colleagues on the World Fair Trade Tartan team.

Lou Marshall, official piper for The Lord Provost, has, this past year, also played on the main stage at National TV Awards, piped the haggis on Good Morning Britain live with Philip Schofield and Holly Willoughby.

Lou Marshall first piped at a Fair Trade awards event in the city in 2006 to promote Edinburgh as a Fair Trade City and she is now getting behind the promotion of the WFT tartan by joining the New York Tartan Day parade for the very first time. Lou will be wearing her hand-made World Fair Trade Tartan kilt as she pipes and marches her way down Sixth Avenue.

Commenting on her involvement in the new World Fair Trade Tartan, Lou Marshall commented: “Being asked by the World Fair Trade Tartan “clan” to join them in New York and represent World Fair Trade producers and suppliers around the globe is truly amazing. This has really underpinned my interest in Fair Trade as the results speak for themselves, this International Women’s Day, with so many women linking and weaving this new tartan and raising awareness wherever they are in the world.”

Behind the World Fair Trade Tartan is Tania Pramschufer, Hand Up Events, who created and registered the new tartan and Eve Broadis, Fair Trade Scotland, the powerhouse behind brokering the partnership with the Cambodian project Villageworks. Working in collaboration with House of Edgar, textile designers behind the tartan, the well-known and distinctive Fair Trade colours of green and blue have been replicated in the woven design.

These two extraordinary ladies – whose worldview is one where supportive endeavour to build business in marginalised communities is paramount, irrespective of the location in the world – they just take it all in their stride – “ask a busy lady if you want to get things done and you get WFTO tartan wrapping its way around the globe” said Hand Up director Tania Pramschufer.

On World Fair Trade Day in the heart of Edinburgh last May – the President of the World Fair Trade Organisation (WFTO), Rudi Dalvai was presented with a new, vibrant, and unique Fair Trade Tartan bespoke kilt hand-made by Cathy Hope from Edinburgh Based artisans - Braw Kilts. This was a dynamic time for Hand Up Events, as they organised their second ‘fashionABLE’ fashion show campaigning for diversity on the catwalk; a carnival parade and a five-hour Fairtrade Fiesta of world music with around 200 performers to support World Fair Trade Day.

“This all happened very quickly,” said Tania, “from sharing the idea with the WFTO, Scottish Government and Tartans Authority through to, coming up with a process for whom and how they tartan design could be utilised.

“We also worked closely with another incredible lady, Cathy Hope at Braw Kilts – as she has a wealth of knowledge and talent when it comes to the kilt-making industry and we are very grateful for this – especially when it came time to making bespoke kilts.

“Some things in life are just meant and this is where Eve Broadis from Fair Trade Scotland, a WFTO member for Scotland, made the truly amazing connection to link us up with inspiring weaver, Anak Norm at Villageworks in Cambodia – a project Eve has supported for many years. This makes it a truly circular project, with the first new tartan bags on sale last year and all proceeds shared between Villageworks and Fair Trade Scotland.  It is such an incredible honour to have been able to bring the World Fair Trade tartan and kilt project to fruition and create a legacy for Scotland as a Fair Trade Nation.

“Eve brought a sample of the woven tartan made by House of Edgar to Cambodia to Villageworks to see if they could replicate the tartan on a loom –  the excitement was hard to contain, as we received images and videos to show the tartan had been reproduced on a six-button handloom. As a result, there is a range of World Fair Trade Tartan products that are 100% WFTO with 100 per cent profits going back to WFTO members.”

“As WFTO members both organisations encompass the ten WFTO Fair Trade Principles into their daily working practice, and the consumer can be confident that their purchase contributes to sustainable livelihoods for the artisans and their families.”

Anak Norm, director of Villageworks, added: “We are very excited to be part of this new venture, which will see the new World Fair Trade Tartan, incorporated into their extensive range of bags and accessories from Cambodia.  Our unique designs, combined with the skills of the artisans, make the new Fair Trade Tartan products a must for the ethically conscious consumer, wanting to buy into a truly sustainable supply chain.”

Said Kyle Dawson, president of the New York Tartan Day Parade: “We shouldn’t need a specific day to celebrate women. We should honour them every day of our lives. To all the women out there: mothers, sisters, daughters, wives… Thank you for making us better men.”

Lou Marshall will be accompanying the Grand Marshall on the Tartan Day Parade 2018.

Hand Up Events, run by Tania, is an ethical events company that focuses on cultural exchange, primarily platforming and promoting Fair Trade as well ethical and local trade through high footfall locations. Hand Up events are unique in that there are organisations attending from around the globe that come to sell and promote their ethical and fair trade products in Scotland, creating a circular economy that benefits everyone within the chain.

For more event information and photos: