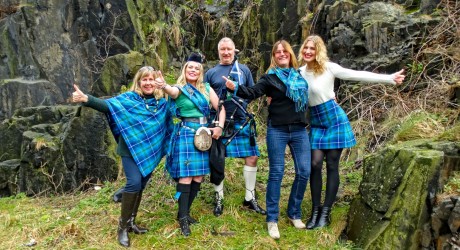 STEPPING out for the very first time In New York, at the 20th NYC Tartan Day Parade this April, the new World Fair Trade Tartan clan is representing and supporting Scotland as a Fair Trade Nation.

The new World Fair Trade Tartan (WFTT) has been created to promote Scotland’s renewed Fair Trade Nation status and to benefit World Fair Trade Organisations (WFTO) members around the globe and will be showcased at the 2018 New York Tartan Day Parade, which brings together pipers and drummers from all over the world, in a celebration of the contribution made to the USA by the Scots.

Lining up alongside Rudi Dalvai, President of the World Fair Trade Organisation (WFTO) and Tania Pramschufer, director of Hand Up Events, Louise Marshall, top Scottish Piper and Piper to the Lord Provost of Edinburgh, will pipe as part of the WFTT clan.

Regarding the participation of the WFT clan, Kyle Dawson, president of the National Tartan Day New York Committee, said: “I am thrilled to see the World Fair Trade Tartan clan coming to Tartan Week and on our 20th Anniversary, it makes it that much more special. What better fabric to represent World Fair Trade than Tartan. The Scots have settled all over the world, branching out to give their mark on the world communities, it’s only fitting that World Fair Trade should be represented by such an amazing fabric.”

The WFT tartan was the brain-child of Tania Pramschufer, Hand Up Events who created and registered it, working on the design in collaboration with House of Edgar, textile designers who replicated the well-known and distinctive Fair Trade colours of green and blue in the woven design.

President of the WFTO, Rudi Dalvai, said: “Fair Trade is a trading partnership, based on dialogue, transparency and respect, that seeks greater equity in international trade. It has proved to be a sustainable development tool by offering better trading conditions to small farmer and handicraft producers.

“It is a great honour for me to take part of the 20th NYC Tartan Day Parade to celebrate Scotland as one of the first globally, Fair Trade Nations and to promote the new World Fair Trade Tartan.:

Tania Pramschufer added: “The journey to New York Tartan Parade is such an honour for the World Fair Trade Tartan clan, as we will be representing Scotland as a Fair Trade Nation and World Fair Trade Organisations, so we feel so very humbled to be joining this great and exciting event and to be making new connections in the USA.

“Through the tartan, we aim to connect with many WFTO projects around the world, to weave the tartan and make into a range of accessories which can then be brought to market and eventually sold not just in the UK, but in US, Canada, Australia and everywhere in between. And working collaboratively, we also aim to bring more awareness of weaving the tartan in Scotland, sharing these resources with other nations and the products to profit Fair Trade members and organisations around the globe.

“Development of the tartan design and colours has been a long but meaningful process and made possible with a great team of people. We worked with Nick Statt and Trudie Ainsworth from House of Edgar, a great Scottish company with a heritage of more than 200 years weaving and a robust ethical and environmental commitment.

“Working together on the design to create World Fair Trade Tartan, the colours and design of this new tartan have been inspired by and gifted to World Fair Trade Organisation GS members to weave using wool and or cotton and then to make into tartan accessories.”

The first Scottish weave was sponsored with support from The Scottish Government and the tartan was finally launched at two events organised by Hand Up Events on May 13th World Fair Trade Day 2017 with WFTO president, Rudi Dalvai, attending from Italy and Scottish Government Minister for International Development and Europe, Dr. Alasdair Allan.

“This marked the beginning of the truly wonderful and uniting tartan journey that we are looking to share with the world”, added Tania, “as WFTO members encompass the ’10 WFTO Fair Trade Principles’ into their daily working practice, and the consumer can be confident that their purchase contributes to sustainable livelihoods for the artisans and their families.”

Fair Trade Scotland has a long term relationship with Villageworks, WFTO GS members in Cambodia, so it was there the tartan headed first and in just over two months, Villageworks had created the first WFTO woven tartan, (First Weave) and proceeded to make it into a beautiful range of gifts.

As well as a first for the WFTT clan, this will be the very first time bagpiping star, Louise Marshall will appear across the Atlantic and will be playing her father’s 120 year-old Robertson bagpipes, as well as sharing her love of the new World Fair Trade Tartan.

In preparation for the NYC trip, Louise said: “It is a huge honour to have been invited to participate in my very first NYC Tartan Day Parade and even more exciting to hear it is our very own fabulous Scottish singer/songwriter and musician KT Tunstall leading as the first female Grand Marshal.”

For information and photos about events and World Fair Trade Tartan:

Hand Up events Hand Up Events, run by Tania Pramschufer, is an ethical events company that focuses on cultural exchange, primarily platforming and promoting Fair Trade as well ethical and local trade through high footfall locations. Hand Up events are unique in that there are organisations attending their events from around the globe that come to sell and promote their ethical and fair trade products in Scotland, creating a circular economy that benefits everyone within the chain.

Biography Louise, who was born in Dumfries, has been playing the bagpipes for 39 years and has performed as the lone piper to the Pope as well as to Her Majesty the Queen and has also j performed on ‘This Morning on Burns Day 2017 piping in the haggis live with presenters Philip Schofield and Holly Willloughby and has performed as the lone piper on the red carpet and on stage at the National Television Awards at the 02 Arena in London, introduced by Presenter, Diarmuid O’Leary, as ‘Scotland’s Hottest Bagpiping Property’.